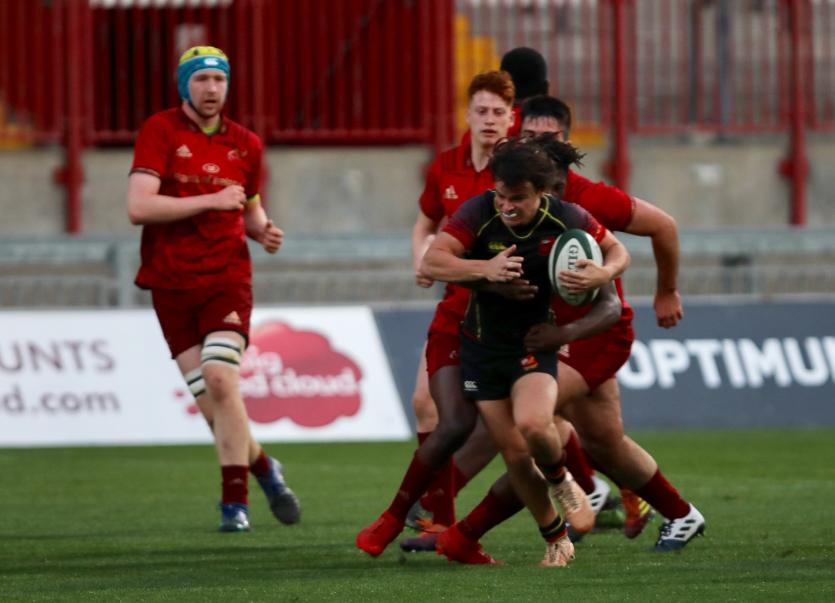 ÁRDSCOIL Ris were edged out by amalgamation side and competition newcomers Munster Clubs Select Player (CSP), on a 29-31 scoreline in their opening Group A fixture of the new-look Clayton Hotels Munster Schools Senior Cup on Wednesday night.

The two sides shared out 10 tries evenly in an exciting and enterprising contest. Munster CSP led 31-24 as the clock ticked into added time.

However, a terrific piece of composed play, which saw Ardscoil move the ball from deep inside their '22, holding onto it through countless phases, eventually resulted in winger Lochlainn O'Keeffe touching down in the left corner for his second of the game. The five-pointer dragged the Limerick side back to within two points of the visitors.

However, the conversion from the most difficult of angles, on the left touchline, was off target as Munster CSP held on for the win.

The winners, who had enjoyed the greater amount of territory and possession in the second half, had a terrific display from second row Diarmuid Dennehy, of Bruff RFC.

On a perfect night for rugby weather wise, Árdscoil Rís made the perfect start when full-back Paddy Hassett and winger O'Keeffe combined to send number eight Jack Ward Murphy over for a well-worked try on five minutes.

Out-half John Moloney duly converted to help the home side into a 7-0 lead.

However, Munster CSP hit back with two converted tries, the first of which was scored by scrum-half Ethan Coughlan. Both tries were converted by out-half Tony Butler to help the visitors into a 14-7 advantage.

WATCH: The finish of one of 3 first half tries for @ArdscoilRisLimk who lead Munster CSP 19-14 at half-time in @ClaytonHotels Munster Schools Senior Cup Group A fixture at Thomond Park #LLSport @LimkLeaderSport @asobrfc #MSSC #Munster pic.twitter.com/ofOWFQg6fM

Back came resilient Ardscoil, however, in the 15 minutes before half-time when they racked up 12 unanswered points.

Left winger O'Keefe and centre Killian Dineen touched down in the 30th and 33rd minutes. Moloney superbly converted the O'Keefe try to help the North Circular Road side into a 19-14 interval lead.

The see-saw nature of the scoring continued as Munster CSP responded with 12 points of their own, including two tries, including one for replacement David Bamidele.

Trailing 19-26, the game seemed to be in danger of running away from the Limerick side. However, to their credit the gritty Árdscoil outfit dug deep and drew within two points on the 61st minute when right winger Eoghan Collins won the foot race to a neat grubber kick in behind the opposition defence  to score.

However, the complexion of the game changed once more when Munster CSP out-half Butler touched down in the 64th minute.

Back came Ardscoil once again and a terrific piece of continuity play, involving both backs and forwards, saw O'Keefe grab his second try of the game in stoppage time. However, the off target conversion meant Munster CSP enjoyed a winning start to the new-look Munster Schools Senior Cup.

Under the new format of the competition this season, the competing teams are divided into two groups of five teams each.

Schools are also guaranteed to play at least one further fixture in the New Year in the play-off phase ensuring players will get a minimum of five competitive fixtures in the Senior Cup this season.

Árdscoil Ris' Group A also features Castletroy College, who travel to Bandon Grammar School on Wednesday next, October 9, as well as PBC, of Cork.

The backs coach with the Árdscoil Ris Senior Cup team is Jack O'Donnell, of Shannon, while Darragh Kennedy is team physio.

Enda Gavigan is team manager. He has also been Munster U18 schools manager in 2019. Will Hughes is conditioner with the squad.