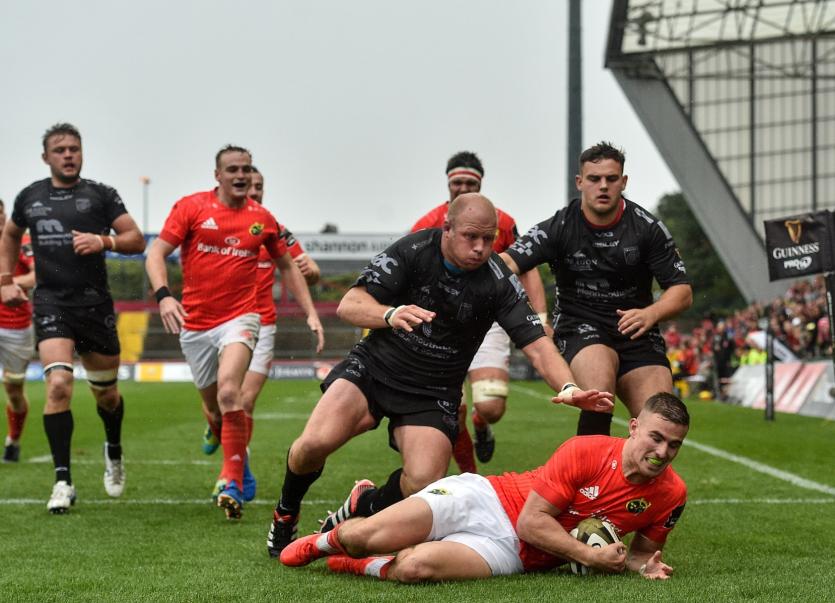 MUNSTER opened their Guinness PRO14 campaign with a clinical 39-9 bonus point win over Dragons before an official attendance of 10,878 on a filthy wet afternoon at Thomond Park.

Munster, minus their 12 Irish internationals on World Cup duty with Ireland, scored three first half tries to lead 22-6 at half-time.

Powerful number eight Arno Botha, Man of the Match Shane Daly and flanker Jack O'Donoghue all dotted down in the opening half.

Munster took full advantage of the sin-binning of Dragons hooker Richard Hibbard to score 12 points in that opening half when he was off the pitch.

The home side dotted down twice more in the second half through Tyler Bleyendaal, who bagged the bonus point try on the hour mark, and replacement hooker Diarmuid Barron late on to seal a commanding success.

It was Garryowen hooker Barron's first ever competitive try for Munster.

James Cronin featured in the PRO14 for the first time since November after recovering from injury.

Munster head coach Johann van Graan will be pleased to see James Cronin feature in the PRO14 for the first time since November after recovering from injury when coming off the bench in the second half.

"Shane is a special player"

Despite the elements, Shane Daly produced a piece of magic in the first half. Jerry Flannery is full of praise of the Munster player.

The win helped Munster extend their unbeaten home record at Thomond Park, the last time Johann van Graan's charges were beaten at the ground in any tournament was against Leinster on St Stephen’s Day 2017.

In contrast, the Dragons have not won on the road in the PRO14 since a trip to Treviso in March 2015 whilst their
most recent victory away to an Irish province was over Leinster at the RDS Arena in February 2015.

Arno Botha scores the first try of the afternoon for @Munsterrugby to take the lead.