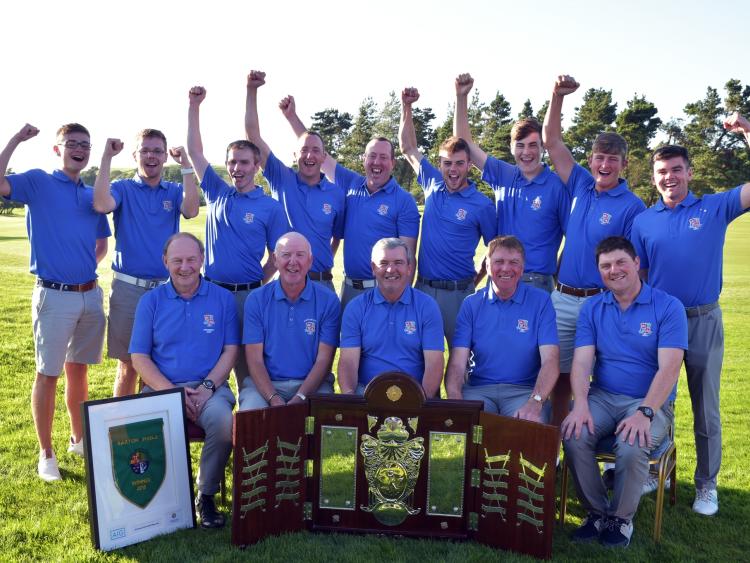 LIMERICK Golf Club is this week celebrating All-Ireland final success at the AIG Cups and Shields Finals in Westport as they captured the Barton Shield for the first time since 1976.

Chasing success on two fronts -- Limerick were also in Senior Cup action on Saturday - the Munster champions completed the first leg in style with a seven-hole victory over Co Sligo.

"It's been a fantastic journey for us in the Barton Shield," said Limerick team captain, Juan Fitzgerald.

"We've been unlucky in a few Irish finals. Sligo beat us back in 2006 at Enniscrone so we kind of owed them one really."

Limerick edged Warrenpoint by two holes in the semi-finals but altered their lineup for the afternoon. Cognisant of course demands and turbulent conditions, team captain Fitzgerald selected Sean Enright instead of Justin Kehoe.

"We made a decision to change the team in the afternoon, which is a hard thing to do," Fitzgerald admitted.

"Justin played really well this morning, but we just felt the golf course is so long and the wind is so strong that we probably needed someone like Sean Enright to come in."

"It's been a great partnership," Reddan reflected. "We holed putts at important times."

After winning the first with a par, Vaughan and Reddan never trailed. Although they wobbled at the eighth when their second shot hit water, the undefeated duo hit back immediately: Reddan holed from eight feet for a winning par at the ninth.

While Limerick controlled the top game, Co Sligo took a grip in game two. The Ford brothers, TJ and Daniel, combined smartly to lead by two holes after nine. But the 10th marked a turning point. O'Brien and Enright halved the deficit after their opponents went out of bounds off the tee.

The Limerick pair won again at 11 to square their game, meaning the Munster men now had a three-hole cushion overall. Co Sligo's sinking hearts suffered another blow at 13: Ciaran Vaughan holed from 18 feet to wrestle an unlikely win.

Limerick's leading pair were five clear after another win at 14. Meanwhile the game behind went all square at 13 as the Fords were forced to take a penalty drop following a wild tee shot into trees. By that stage, the holes were running out for Co Sligo. As Limerick maintained a five-hole lead through 15 and 16 in game one, their second pair went ahead at 14.

On the 15th green, Owen O'Brien closed out the match with a putt befitting any final. He holed from 25 feet for a birdie, pushing Limerick over the line.

Earlier, Limerick overcame perennial contenders, Warrenpoint, in a close run semi-final. The top game went Limerick's way when Ciaran Vaughan and Michael Reddan prevailed by one hole against Paul Reavey and Rian Carvill. With Justin Kehoe and Owen O'Brien leading after 17, there was no way back for Warrenpoint.

Co Sligo booked their place in the final with a comfortable win over Dundalk. Ruairi O'Connor and Thomas Finnegan led the Sligo charge, blitzing their opposition to win by seven holes.

Galway Golf Club ended Limerick's big hopes of a double when winning their Senior Cup semi-final on a 3.5-1.5 scoreline.