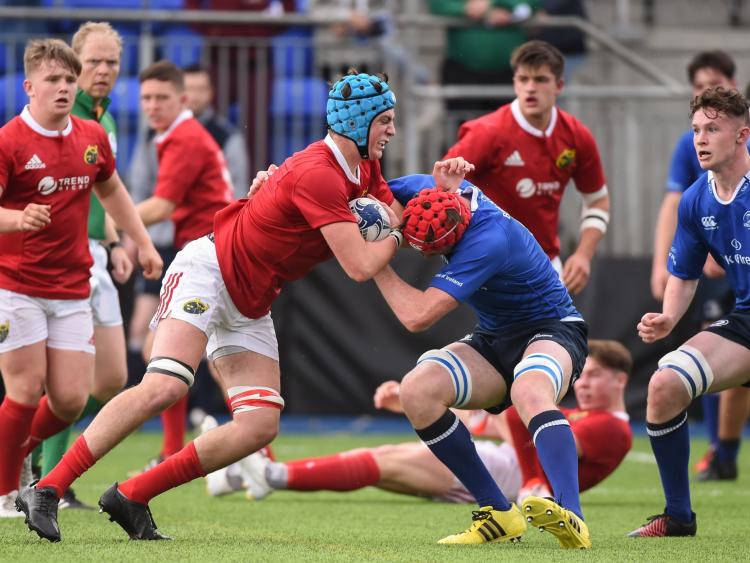 Luke Clohessy, pictured here in action against the Leinster U18 Schools side in 2016, lined out for Munster A in their Celtic Cup game with Ospreys Development at Musgrave Park

MUNSTER A opened their Celtic Cup campaign with a share of the spoils in a 20-20 draw with Ospreys Development on Friday night at Musgrave Park.

The visitors were on the scoreboard in the opening minutes after an intercept saw Ospreys centre Chay Smith dot down for a try, with Joshua Thomas adding the conversion after just four minutes.

Despite dominating territory it took Munster until the 39th minute to draw level after great work from captain Jack Crowley, Pa Ryan and Matt Bowen saw the trio combine to send Cian Hurley in for the province’s first score.  Crowley converted to leave it 7-7 at half time.

Ospreys were reduced to 14 men after Garin Lloyd was yellow carded, and Peter Malone’s charges went ahead three minutes into the second half when Charlie O’Doherty dived over in the corner for a try, and a 12-7 lead.

A try minutes later from Ben Cambriani brought Ospreys level 12-12 after some good handling by the Welsh side.

Crowley and Thomas exchanged penalties before Scott Buckley barged over for a Munster try at the end of the third quarter.

Again great handling by Ospreys saw George Gasson score in the corner to tie the scores for the fourth time in the game with 13 minutes remaining.

Munster continued to press and applying the pressure in the closing minutes, but excellent defending by the Welsh visitors kept them at bay and it finished level at 20 all.

While the youthful men in red dominated the scrums, the Welsh side did better with ball in hand and produced some impressive phases of possession which saw them gain vital ground at crucial stages.

Cian Hurley and Scott Buckley were impressive in the loose while Ronan Quinn made some telling runs and Rob Hedderman was solid under the high ball.