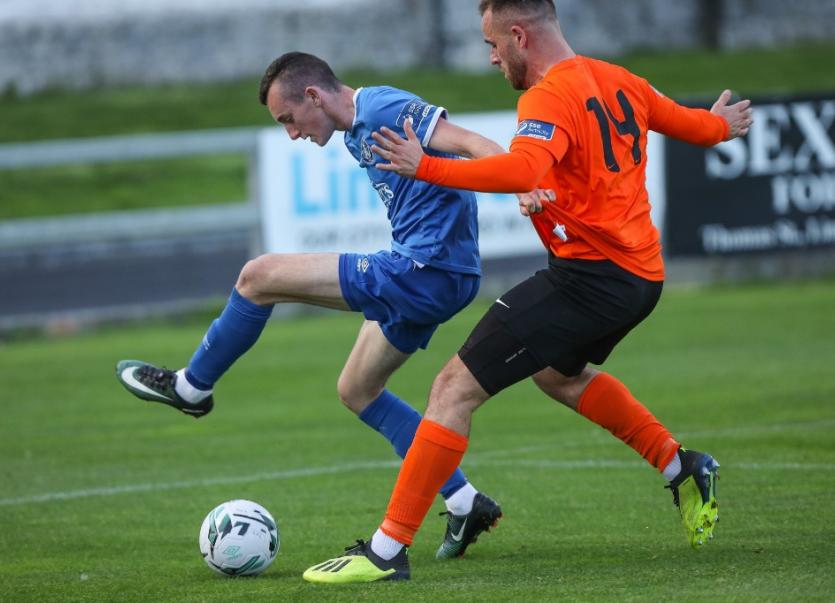 LIMERICK FC ended a four-game losing run in the SSE Airtricity League First Division when playing out a 1-1 draw with struggling Athlone Town before an official attendance of just 227 paying customers at the Markets Field on Friday night.

A deflected second half goal from Darren Murphy's shot secured a share of the spoils for the Blues who deserved at least a point from the game following their improved second half showing.

Limerick will feel disappointed that they could not find a winner in the final quarter after a much improved second half display. The home side have not won in the First Division since their Friday, July 5 victory over Longford Town.

Athlone's last victory was on the same night and against a side which had conceded 15 goals in their five previous games, the Blues will feel frustrated not to have managed a match-winning second goal.

Having lost their previous four league fixtures, the draw was at least a positive result for Tommy Barrett's charges ahead of their FAI Cup second round tie with Premier Division Sligo Rovers at the Showgrounds on Saturday, August 24, 8pm.

Limerick started with ex-Nenagh player Ciaran O'Reilly partnering Robbie Williams, in the heart of their defence.

Limerick enjoyed the upperhand in the opening quarter as Shane Tracy, Edmond O'Dwyer and O'Reilly all coming close to opening the scoring.

The home side also earned a host of corners, seven in all in the first half, but failed to take advantage of any of them.

On 32 minutes, O'Dwyer tested the Athlone 'keeper at the near post after making a powerful surge into the penalty area. However, the visiting goalkeeper proved up to the task.

Athlone did take the lead three minutes before the break. The lively Jamie Hamilton created the opening down the left before producing a pinpoint cross which striker Nika Kaladarishvili finished to the net. The goal further sucked the life out of the already subdued atmosphere.

Athlone retained their advantage until the break. Blues boss Tommy Barrett made a double substitution seven minutes after the restart in a desperate bid to rejuvenate the home side as Kieran Hanlon and Darren Murphy were sprung from the bench.

Ten minutes into the second half, Limerick threatened to draw level only got Karl O'Sullivan's effort to be saved by Athlone 'keeper Aaron Myles.

The Blues were desperately unlucky not to draw level in the 57th minute. Adam Foley picked up the ball just inside his own half before sliding a precise pass into the path of O'Sullivan who raced goalwards. O'Sullivan powered through the Athlone defence, but his effort on goal, with the Athlone keeper beaten, slid inches wide.

On 62 minutes, Limerick again came close to equalising. Jason Hughes volleyed' effort on goal flew into the path of the in-rushing Foley, but he was unable to find the net from close range.

However, Limerick were counting their lucky stars they didn't go 2-0 down on 68 minutes when Evan Pierce powered through the heart of the home defence and bore down on goal. However, his effort on goal was superbly saved by Blues shotstopper Brady.

Back came resilient Limerick again, however, and as the chances mounted, it seemed inevitable that the home side would draw level. The equaliser arrived in the 75th minute when Darren Murphy's effort took a wicked deflection past Athlone keeper Myles before nestling in the back of the net.

The see-saw nature of the game continued, however, with the Midlanders coming close to regaining the lead. However, Kealan Dillon's effort flew over the crossbar.

Limerick continued to threaten too and after a powerful surge from Shane Tracy inside the penalty area, an Athlone defender managed to flick the ball away from 'Red' Hanlon just before he was about to strike.

This was the second draw between the clubs this season as they drew 1-1 at the Athlone Town Stadium at the end of May.