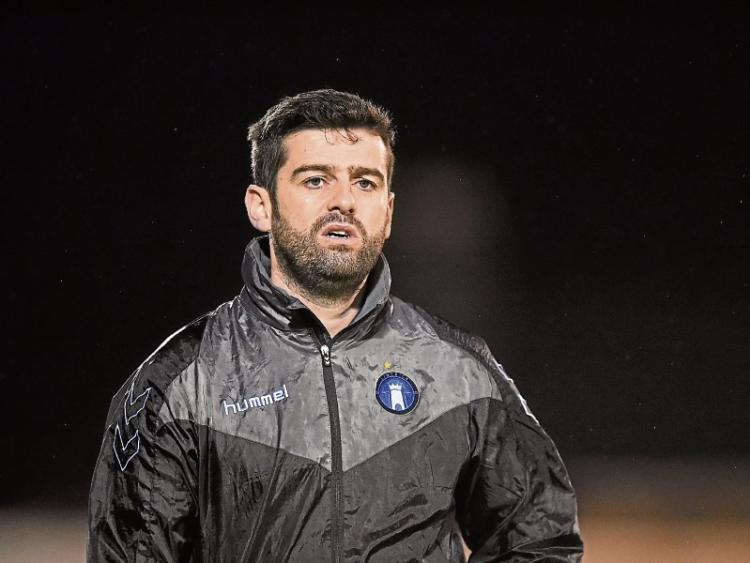 Limerick FC manager Tommy Barrett saw his side safely advance to the second round of the Extra.ie FAI Cup with a narrow win over Cobh Wanderers

SUBSTITUTE Edmond O'Dwyer proved the Limerick FC hero as he came off the bench to fire Blues to a hard fought 1-0 Extra.ie FAI Cup first round victory over Cobh Wanderers at St Colman's Park on Friday night.

O'Dwyer, back to full fitness after recovering from a broken nose, came off the bench in the 62nd minute and popped up with the winning goal in a tight Cup tie when firing home superbly from Karl O'Sullivan's cut-back.

The goal finally helped the visitors get the better of the Munster Senior League side who could be well pleased with their display if not the result.

Limerick, who had lost each of their last four games in the SSE Airtricity League First Division, can now look forward to the Extra.ie FAI Cup second round draw which will take place on Monday next, August 12 at 5pm at FAI HQ, Abbotstown.

The game turned out to be a tricky assignment for Tommy Barrett's side who lined out without the likes of the injured Shane Tracy and Clyde O'Connell.

While Limerick are coming towards the end of their league season, in contrast Wanderers will only start their Munster Senior League Premier Division programme on Sunday, August 18.

Bray looked lively in the opening half, creating a number of promising opening, the bets of which arrived in the 38th minute when Blues keeper Jack Brady did well to deny Cal Sheehy from a well struck effort.

Limerick created chances of their own too, with Karl O'Sullivan only prevented from putting the visitors in front by a great save from home keeper Power.

The visitors were more threatening going forward as the second half wore on. Following a powerful run to the byline, O'Sullivan pulled the ball back for O'Dwyer to smash it home with just 10 minutes remaining.

Limerick managed to see out the final minutes of the game with their lead in tact as the Blues booked their place in the last 16 of the competition.

Next up for Limerick is an SSE Airtricity League First Division fixture with Athlone Town at the Markets Field on Friday night next, 7.45pm.