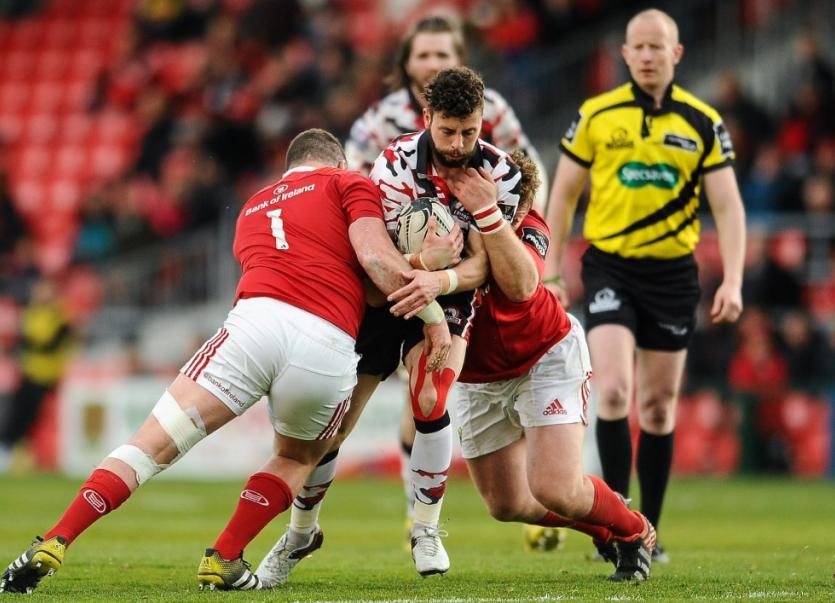 Sean Kennedy, playing for Edinburgh, is tackled by Dave Kilcoyne and Stephen Archer, of Munster, in their Guinness PRO14 clash at Musgrave Park in 2016

SCRUM-HALF Sean Kennedy, who grew up a Munster fan from his time living in Westbury, Corbally has signed for Glasgow Warriors on a one-year partnership contract with Stirling County’s Super6 team ahead of the 2019/20 campaign.

Kennedy returns to Scotstoun following a successful loan spell during the 2012/13 season, when the 28-year-old made seven appearances for the club.

As part of the deal, the talented half-back will be available to play for Stirling County’s Super6 team when he’s not selected for the Warriors.

Kennedy left Edinburgh Rugby at the end of last season after spending eight seasons with the Scottish side.

Although born in Scotland, Kennedy grew up a Munster fan in Westbury, Corbally where he attended Scoil Ide. He played his under-age club rugby with St Mary's RFC and Gaelic football with Parteen.

Kennedy’s father Bernard is Irish and his mother Tracey is Scottish.

After moving to Scotland, Kennedy attended Lornshill Academy in Alloa and took his first steps in rugby with the Alloa and Stirling County clubs.

The exciting half-back represented the country at under-20 level and played for the country's sevens team.

He also has had loan spells at Glasgow Warriors and London Irish.

Speaking to www.glasgowwarriors.org, Sean Kennedy, said: "It’s been really good to get back involved with the boys.

"Training has been going really well – I’ve enjoyed getting to know all of the boys, as well as Dave and Jason. I’m lucky I know Kenny and I’ve worked with John Dalziel with Scotland 7s.

"When I was here on loan before I didn’t play that much, but I really enjoyed myself. The style of play that Glasgow favour was a massive factor in my decision to come back – obviously different coaches will have different focuses, but I loved watching the free-flowing attacking play and I want to be a part of that.

"It’s always been a part of the game I enjoy, trying to get to breakdowns as quickly as possible and keeping that tempo high.

"I came through the ranks at Stirling County, from Under-18s right up until I signed full-time with Scotland 7s, so it’ll be great to get back there too.

"With Super6 on the way, I’m hoping we can do something special. I’m excited about it, especially the cross-border element of the competition. With boys being semi-pro now, the standard should be that bit higher, so it’s a great prospect."