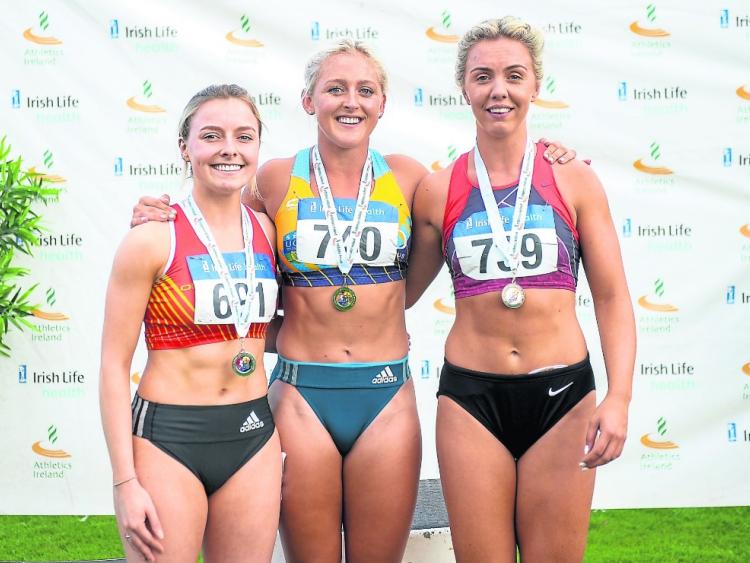 Lisnagry woman Sarah Lavin, centre, of Emerald AC, after her win in the 100m hurdles final at the National Athletics Championships with Sarah Quinn, Co Mayo, left, and Lilly-Ann O'Hora of Dooneen AC

FOUR Limerick-based athletes have been selected on the Ireland squad to compete at the European Athletics Team Championships First League in Sandnes, Norway from August 9 to 11.

Nineteen-year-old Ciara Neville, from Monaleen, will compete in the 100m. The in-form Emerald AC athlete won the women’s 100m at the Irish Life Health National Athletics Championships in a new championship record of 11.33 seconds at Morton Stadium, Santry on Sunday.

Ciara Neville has also been included in the Irish women's 4x100m relay squad which will compete at the European Athletics Team Championships First League in Norway.

Elsewhere, Lisnagry's Sarah Lavin, also of Emerald AC and UCD, has been selected to compete for Ireland in the 100m hurdles in Norway.

Lavin continued her fine form to win the women’s 100m hurdles at the weekend's National Athletics Championships in 13.30 from another personal best performance from Sarah Quinn (St Colman’s South Mayo) in 13.47 and another Limerick woman Lily-Ann O’Hora (Dooneen) in 13.60.

Meanwhile, another Emerald AC athlete Jenna Bromell is a member of the Ireland 4x400m relay squad which will compete for Ireland in Norway next month.