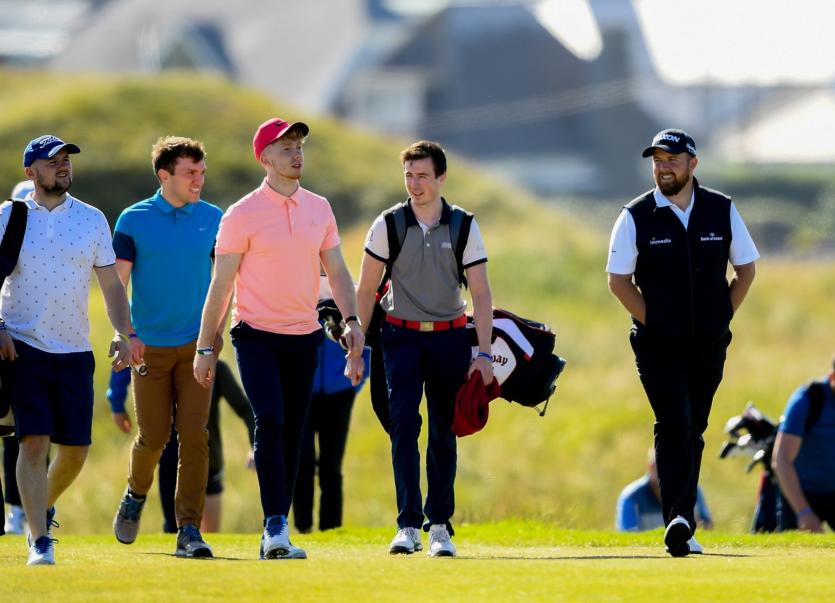 LIMERICK'S Munster hurling final hero Cian Lynch and his playing partners, including leading Irish professional Shane Lowry, attracted the biggest gallery of the morning starters in the Pro Am at the Dubai Duty Free Irish Open at Lahinch Golf Club.

Lynch was playing in the company of fellow hurling stars, Joe Canning, of Galway, and Clare's Shane O'Donnell along with 2009 Irish Open winner Lowry, who won the tournament at Co Louth Golf Club as an amateur.

The players were greeted by sunny, warm conditions with only a light breeze blowing across the famed West Clare links which is in pristine condition for the visit of many of the world's top golfers.

Thousands of golf fans flocked to the course to watch the starts of sport and entertainment showcase their golf skills in the company of Europe's leading professionals on Pro Am day, the traditional eve of tournament event.

The star hurlers took time out to to sign autographs and take selfies for delighted sports action.

Up to 100,000 golf fans are set to descend on the seaside town of Lahinch between now and Sunday.

Some of Ireland’s most notable celebrities have headed to the links this week to compete in the Dubai Duty Free Irish Open Pro-Am.

Former One Direction star and keen golfer Niall Horan is set to draw a large crowd on Wednesday afternoon when he gets his round underway at Lahinch 1.30pm, with fellow Irish popstars Keith Duffy – formerly of Boyzone – and former Westlife singer Brian McFadden among the celebrities taking part.

'Left lip & firm' - Limerick's Munster SHC final hero hurler Cian Lynch about to line up a putt on the 9th green during the Pro Am at the @DDFIrishOpen at Lahinch on Wednesday #LLSport #IrishOpen @Limerick_Leader pic.twitter.com/Gyxy1NeyHY

In addition to world-renowned actor James Nesbitt, there are also a host of Irish legends from the sporting world set to compete, including rugby heroes Paul O’Connell and Keith Wood, superstar jockeys AP McCoy and Ruby Walsh.

This year's Dubai Duty Free Irish Open is part of the Rolex Series and boasts a total prizefund of $7 million.

Tournament organisers say tickets for Saturday and Sunday at the Dubai Duty Free Irish Open are now in limited supply and may sell out during this week. The organisers are 'strongly advising fans planning to attend at the weekend to purchase their tickets in advance online, otherwise there is a chance they may not gain admittance at the gate.'