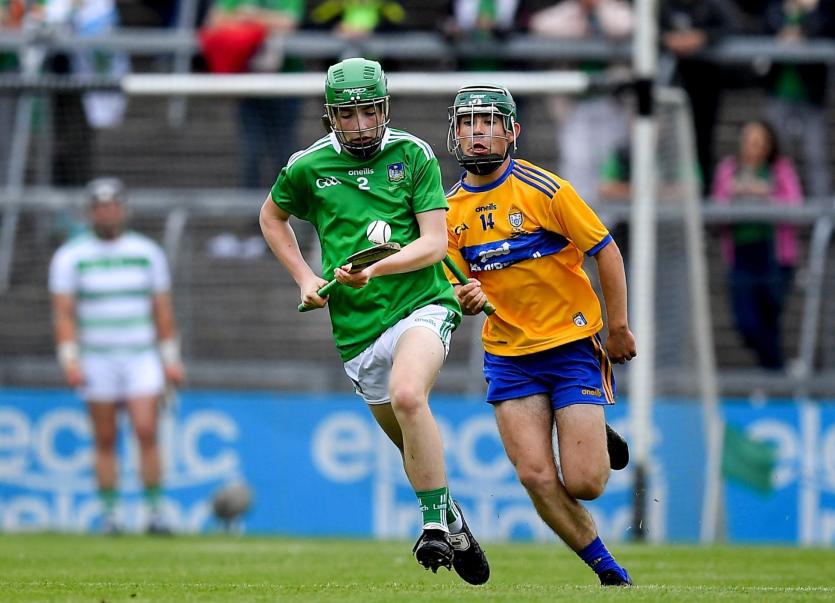 LIMERICK claimed their eighth Munster minor title with a deserved 1-17 to 1-11 victory over Clare in their provincial final played at the Gaelic Grounds on Sunday.

Limerick can now look forward to an All-Ireland semi-final appearance on the weekend of July 27-28 after claiming a first Munster title at minor grade since 2014.

Limerick were crowned champions on the back of an impressive provincial campaign which saw the Shannonsiders remain unbeaten through their four round robin games and then settle down impressively after a nervy start in the final to claim victory in the first provincial final between these great rivals for 30 years.

Sharpshooter Cathal O'Neill struck over nine points in all, including three from play, as the Diarmuid Mullins side made their sixth Munster final appearance in seven years a winning one.

Limerick, who had beaten their Munster final rivals Clare by three points in their round robin fixture at the Gaelic Grounds three weeks earlier, opened the game nervously running up four wides inside the opening six minutes.

By then, a lively Clare side had raced into an early two point lead through Tony Butler and Shane Meehan.

Slowly Limerick began to settle and had drawn level by the eighth minute with two points from sharpshooter Cathal O'Neill and Aidan O'Connor.

Clare regained the initiative, however, with the Banner side firing over three unanswered points from Meehan and Cian Galvin frees as well as a fine long range effort from Diarmaid Cahill.

The see-saw nature of the scoring continued, however, when Limerick replied with a run of four unanswered points of their owna, ll from Crecora-Manister clubman O'Neill, including two excellent efforts from play, the second of which preceded by some excellent defending from full-back Ronan Lyons.

Limerick's hurling had improved by this stage as the home side was playing with a greater degree of composure and assuredness.

The sides were level on two further occasions before half-time, however, before two late points from Adam English, a terrific team score from under the Mackey Stand and O'Neill once more, helped the Shannonsiders into a 0-9 to 0-7 interval lead.

The major downside for Limerick during the opening 30 minutes was their tally of eight wides, the majority of which were down to shooting under pressure.

Limerick made the better start to the second period pilfering the first two points after the restart through Aidan O'Connor and Adam English, following a fine piece of play by Patrick O'Donovan.

Limerick held a four-point lead 0-12 to 0-8 after 43 minutes when a final which had bubbled away nicely finally burst into life.

Clare looked to be right back in the contest when grabbing the game's opening goal. The lively Shane Meehan raced through the Limerick defence before rifling a shot goalward. After consulting with an umpire, the match referee awarded a goal, as the sliotar was judged to have come out through a hole in the netting.

The Limerick lead was down to a single point. However, if the home side was rattled, they didn't show it. Limerick replied with a smashing goal of their own within a minute.

Ballybrown's Aidan O'Connor made the initial opening when gaining possession within 20 metres of the Clare goal. O'Connor found Patrick O'Donovan with a well-placed pass and the Effin teenager delightfully flicked the ball into the net.

Limerick's lead was back to four points at 1-12 to 1-8 and the new Munster champions outscored their rivals 0-5 to 0-2 through the closing quarter to ease to victory.