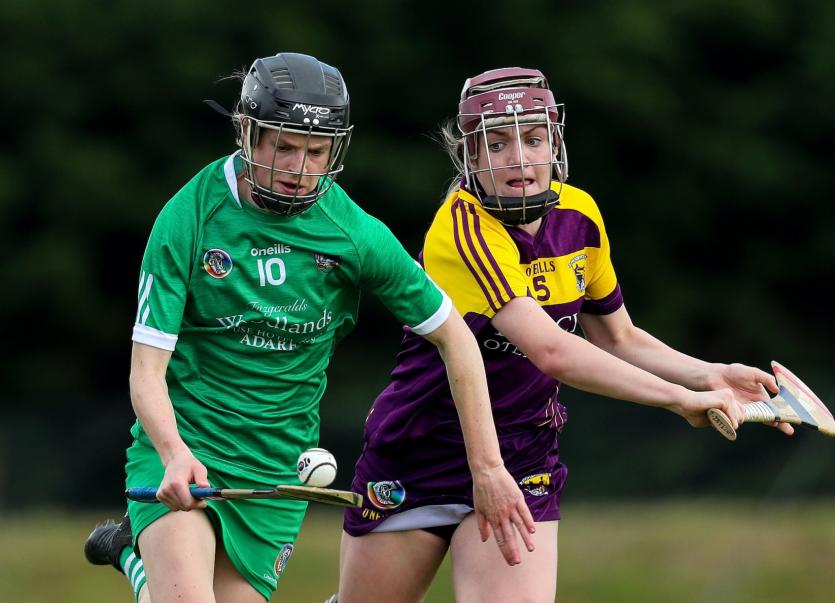 LIMERICK made it back-to-back wins in the Liberty Insurance All-Ireland Senior Camogie Championship with a 1-18 to 1-10 win over Wexford.

The victory in Croagh moves Limerick within touching distance of the knockout stages for the first time since 2005.

Limerick have Galway and Kilkenny still to play but this win over Wexford and the round one win over Offaly has the Declan Nash managed side primed for at least a quarter final tie.

Not for the first time Niamh Mulahy was the scoring hero with a 14-point return.

The game was level for just the second time at half time - Limerick 0-9, Wexford 1-6.

Limerick were backed by the tricky breeze in the opening 30-minutes but hit nine wides - compared to just two for the visitors to west Limerick. The home side were to finish with 14 wides with just four for Wexford.

Captain Caoimhe Costelloe had Limerick off the mark in the second minute but Wexford were ahead after seven minute 1-1 to 0-1 when a 40-metre Linda Bolger free went all the way to the net.

Two Niamh Mulcahy frees attempted to steady Limerick but Wexford had started in determined fashion and Joanne Dillon was to score three first half points from play.

After Mulcahy added two fine points from play it was Limerick 0-5 Wexford 1-3 and 20-minutes played.

Dillon and Bolger again stretched Wexford clear with a second score from Costelloe ending a run of wides for the girls in green.

Goalkeeper Laura O'Neill then came to the Limerick rescue with a great save from Aoife Guiney.

This spurred Limerick to finish the half on top with three unanswered points to draw level.

That was seven points for Mulcahy in the opening half and she was to add another seven in the second half!

Wexford went back ahead early in the second half but four frees from Mulcahy had Limerick on top and setting the pace at 0-13 to 1-7.

Another Bolger free hit back but in the 51st minute came a key Limerick goal - captain Costelloe fetching a Mulcahy free in the goalmouth and finishing brilliantly to the net to open a five point lead for the first time.