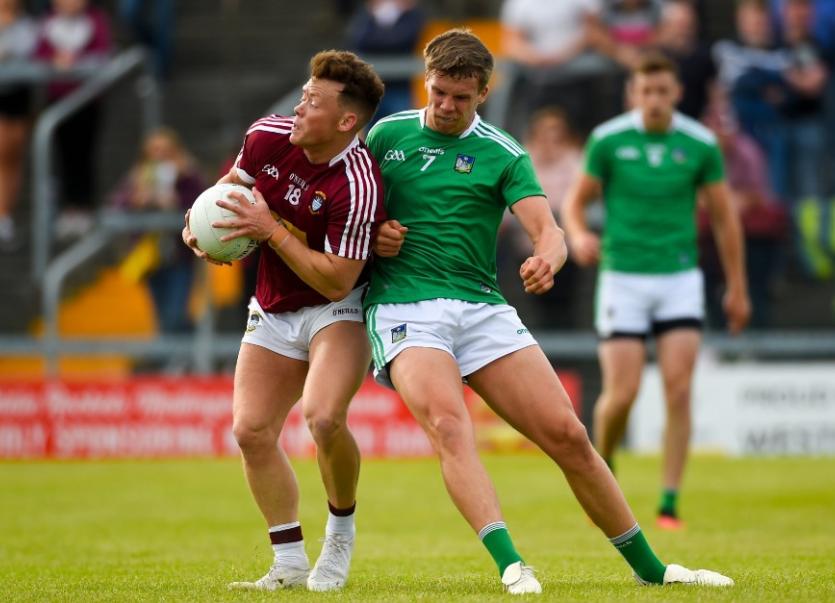 LIMERICK exit the All-Ireland SFC after defeat to Westmeath this Saturday evening in Mullingar.

This was a battling display from Billy Lee's side in TEG Cusack Park but a goal in the immediate minute either side of half time proved the difference.

It was a hard-working opening half from Limerick but the scores came easier for the men in maroon.

Ultimately 1-1 from the home side in injury time proved the difference at half time.

Limerick trailed just 0-7 to 0-5 after 30-minutes but failed to score again and Westmeath pushed on to ensure a seven point interval advantage.

After five minutes of the tie, Limerick were ahead with wing backs Gordan Brown and Iain Corbett on the mark for a 0-2 to 0-1 lead.

Alas, the men in green then went 11-minutes without score and Westmeath had edged themselves 0-4 to 0-2 ahead.

A Jame Lee free in the 16th minute reduced the margin to a point but Ger Egan scores again stretched Westmeath clear.

Another free from Lee and it was 0-7 to 0-4 but Limerick growing in confidence.

Lee kicked a super point from play and there were just two points between the teams with five minutes to half time - it was to be the only Limerick score from play in the final 30-minutes of the half after the early points.

But it was Westmeath that pushed positive to the half time dressing room with points from Ronan O'Toole and Callum McCormack.

In the second minute of injury time came a killer blow - James Dolan crashing low to the net just inside the right post.

At 1-9 to 0-5 Limerick were left with an uphill struggle in the second half.

The size of that hill got much bigger just 29-seconds into the new half when Joe Halligan had another goal for Westmeath to move them 10-points clear.

Credit Limerick they battled back and dominated possession for the next 10-minutes with three Jamie Lee pointed frees to show for their efforts.

But for all the Limerick endeavor, Westmeath went up the field and after nine minutes without a score they kicked two from play within 60-seconds.

Limerick needed a goal and Cillian Fahy almost linked up with Padraig de Brun and Seamus O'Carroll had another drive but none hit the target.

Then came the necessary goal - Darragh Treacy with great perseverance to find the net after carrying the ball forward himself.

It was the spark that Limerick needed and when Seamus O'Carroll kicked a fine point minutes later the lead was down to five points and still over 10-minutes to play.

When goalkeeper Donal O'Sullivan pointed a free the lead was four points.

But after going 18-minutes without a score Westmeath's sub John Heslin ended their barren spell and moved the lead back out to five after a period of Limerick pressure.

Limerick weren't to score in the final 10-minutes that were played with another Ger Egan free sealing the Westmeath win in the final minute.