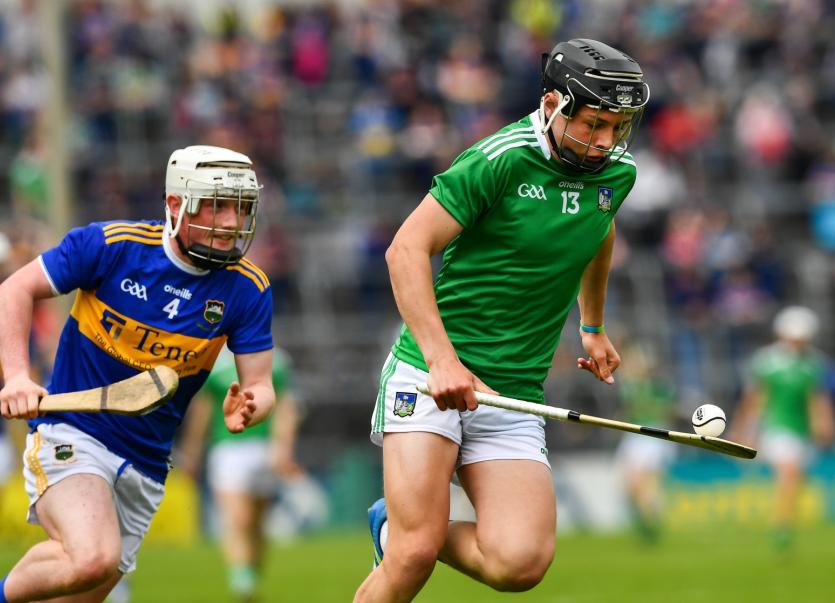 LIMERICK minor hurlers powered their way into the Munster final at the end of the month after scoring a convincing 15-point victory over Tipperary in their final round robin fixture at Semple Stadium, Thurles on Sunday.

Clinical Limerick now set their sights on a sixth Munster minor final appearance in seven years when Clare will provide the opposition in the provincial decider at a venue to be confirmed on Sunday, June 30.

The Shannonsiders laid the foundation for this runaway victory in the opening half after which they held a commanding 10-point lead, 2-13 to 0-9. Those first half goals, Limerick's first since their opening round draw with Cork, came courtesy of Cathal O'Neill and Aidan O'Connor.

A third Limerick goal within five minutes of the restart effectively ended the game as a contest and they simply cruised their way to victory through the second half, sealing a convincing 3-24 to 1-15 success by full-time.

All six of Limerick's starting forwards and both midfielders managed to score from play which is an impressive statistic for any side.

Limerick came into the game unbeaten, on the back of their win over Clare last weekend and draws with both Cork and Waterford, while Tipp had won one of their two previous round robin games.

Limerick were dealt a blow prior to throw-in as team captain Michael Keane, of Adare, was ruled out through injury. Full-back Keane was replaced in the starting line-up by Michael Cremin, of Newcastle West.

Keane's absence added to the blow of losing talented wing back Colin Coughlan to injury who has been out of action since before the Clare game.

Limerick had made another change in their original match selection for the game named on Friday night as Patrick O'Donovan, of Effin, came into the side for Diarmuid Hegarty.

However, Limerick coped with the loss of those absent defenders very impressively

In ideal conditions, Limerick made the livelier start, their hurling crisp and assured and their use of possession very impressive.

Impressive too was their enormous workrate and the slick movement of their forwards and their composure in the scoring third.

Crucially this time, Limerick drove their advantage in general play home on the scoreboard  and in a big way.

The visitors led 0-3 to 0-2 after seven minutes, thanks to two pointed frees from sharpshooter Cathal O'Neill and the opening point of the game from Patrick O'Donovan.

O'Neill showed his immense value to this side in the eighth minute when he forced his way through the Tipp defence, before flicking the ball to the net. It was a huge score in the context of the game and Limerick's first green flag since their opening round win over Cork.

Limerick had failed to rattle the net against both Waterford and Clare, but the psychological value of a goal so early at Semple Stadium was significant.

Limerick continued to keep their opponents, who had lost two of their three previous round robin games, at arms length through that opening half.

Points from Patrick Reale, who struck two fine efforts from play in the opening half, Cian Casey, 2, and O'Neill helped Limerick steer six points clear at 1-8 to 0-5 after 17 minutes.

The Shannonsiders led by seven points, 1-10 to 0-6 when Aidan O'Connor raised a white flag in the 21st minute before a beautiful flick from O'Neill from under Árdan Uí Riain found O'Donovan who pointed superbly.

With Tipp placing an over-reliance on Jack Leamy for scores, Limerick's back managed to keep the lid on Tipp's forwards.

Then, with a minute of normal time remaining in the opening half, Mungret St Paul's Liam Lynch set up the unmarked O'Connor for a smashing Limerick goal to put 10 points between the sides. It was going to take a comeback of epic proportions for the home side to come back from there.

Limerick maintained their 10-point advantage until half-time at 2-13 to 0-9.

If Tipperary harboured even the slightest hope of staging a revival they were ended within five minutes of the restart when Adam English flashed the ball to the net for the Shannonsiders third goal. At 3-14 to 0-10 only the margin of Limerick's victory remained in doubt.

Limerick freewheeled their way to victory during the closing quarter, although an outclassed Tipperary side did manage a late goal through substitute Kyle Shelly.