Limerick and Clare set for 'Battle of the Banner' 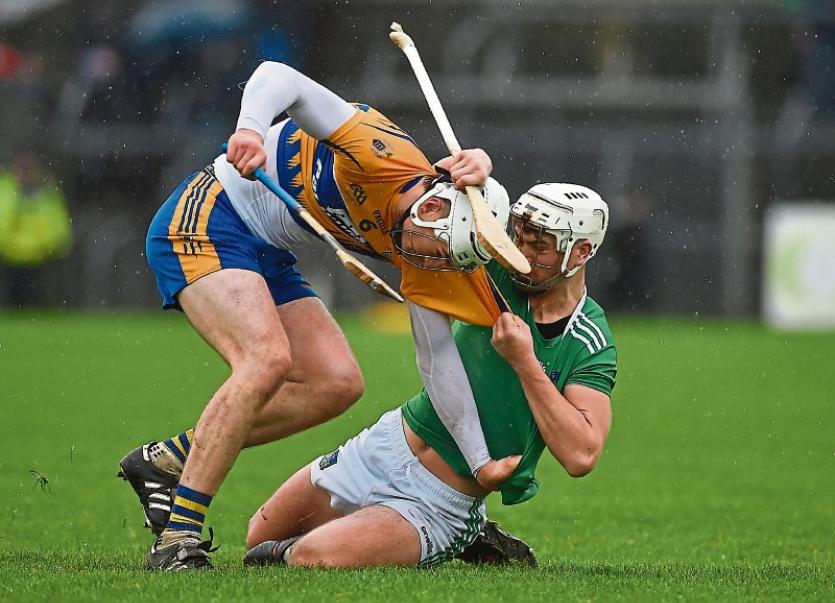 Dragging rights: Conor Cleary of Clare and Kyle Hayes of Limerick tussle off the ball during the Allianz Hurling League when the sides met in March. The neighbours go to battle once more on Sunday in

FOR the first time since Ciaran Carey’s wonder point dethroned Clare as All-Ireland champions in 1996, Clare come to Limerick for a Munster SHC derby this Sunday.  The Shannonside rivals have met 56 times in championship hurling but across the last 100 years the Gaelic Grounds has hosted just 10 local derbies – Limerick winning all!

Limerick and Clare have met in Croke Park, Cusack Park and Semple Stadium in championship fare across the last 23 years but not since Ciaran Carey’s sliothar sailed between the posts at the Caherdavin End goalposts have the sides returned to the Ennis Road venue for a Munster SHC derby.

Sunday (4pm) will be the fifth successive year the counties meet in the championship with ‘The Banner’ winning in each of the last three years.

Just over 20,000 are expected into the LIT Gaelic Grounds on Sunday for a game that will be live on RTE television’s The Sunday Game. Tickets are €25 stand and €20 terrace on the day, with a pre-sale €5 saving in Centra and SuperValu shops and online on www.tickets.ie and will also be available to purchase at ticket vans outside the ground on matchday.

It's the second home game of the championship in the LIT Gaelic Grounds for the All-Ireland and League champions, who need to build on last Sunday's Waterford win to remain firmly alive in their title defence. “We are at home on Sunday and that 16th man has been a huge help to us in the last 18-months or 20-months. They were huge last year and at key moments in games when we needed them and I'd be hoping that the 16th man can play a big part on Sunday and give us every bit of support because we will need it all,” appeals Limerick manager John Kiely to supporters.

“Of course we were cognizant of the fact that supporters would have been disappointed with the performance too but first and foremost the boys are the ones that are putting in the hard yards every week since last December and of course you want to do better in front of your home crowd in particular and we wanted to put in a performance that the supporters could be proud of,” outlined Kiely who was a substitute when Clare last came to town in ‘96.