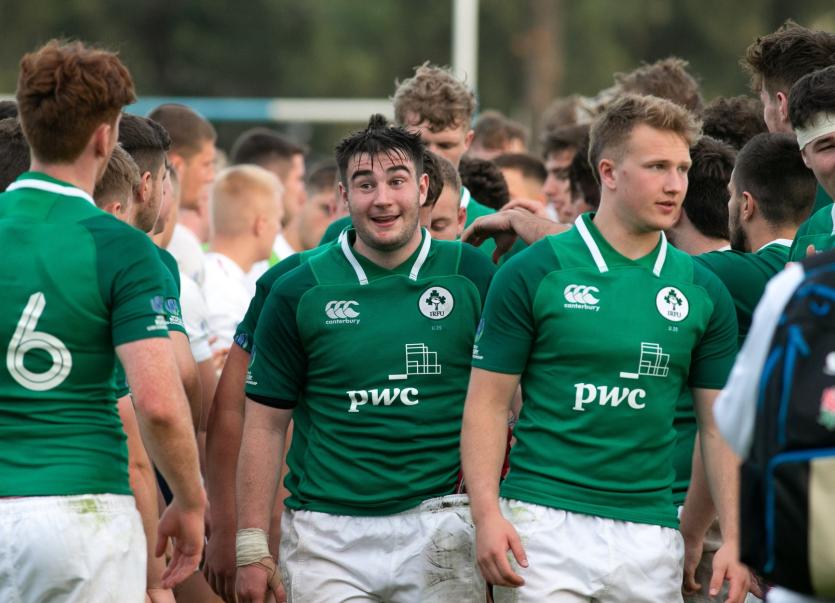 Ireland back-row John Hodnett, centre, pictured after their thrilling U20 World Cup victory over England in Argentina on Tuesday evening

MUNSTER players had a starring role as the Ireland U20s side ran in six tries in easing past England U20s 42-26 in their opening round World Rugby Under-20 World Championships pool fixture in Santa Fe, Argentina on Tuesday evening.

Grand Slam champions Ireland outscored their opponents by six tries to three to get their campaign off to the best possible start.

England played the final quarter with 14 men after picking up a red card, while the losing side also had two sent to the sin-bin either side of half-time.

Shannon out-half Jake Flannery crossed for Ireland's first try in the 11th minute before adding the extras himself, while a Stewart Moore try saw Noel McNamara's side take a 14-13 lead at the break.

A superb Ireland side, led by vice-captain Craig Casey, of Shannon at scrum-half, added four more tries after the break, including a brace from flanker David McCann, while replacement Ben Healy, of Garryowen, and his Munster team mate John Hodnett also touched down to seal a famous win.

Ben Healy scores in the left corner for Ireland from a Craig Casey pass, and Healy himself kicks the extras from the touchline.

This was the Ireland U-20s second win of the season over England whom they defeated 35-27 during their Grand Slam-winning run in Cork in February.

Jake Flannery goes over, and the try is awarded after referee Damon Murphy confirms with the TMO that there was no knock-on.

Next up for Ireland is a crucial fixture with another side to score an impressive opening day win, Australia. The game takes place on Saturday at 2.30pm Irish time.