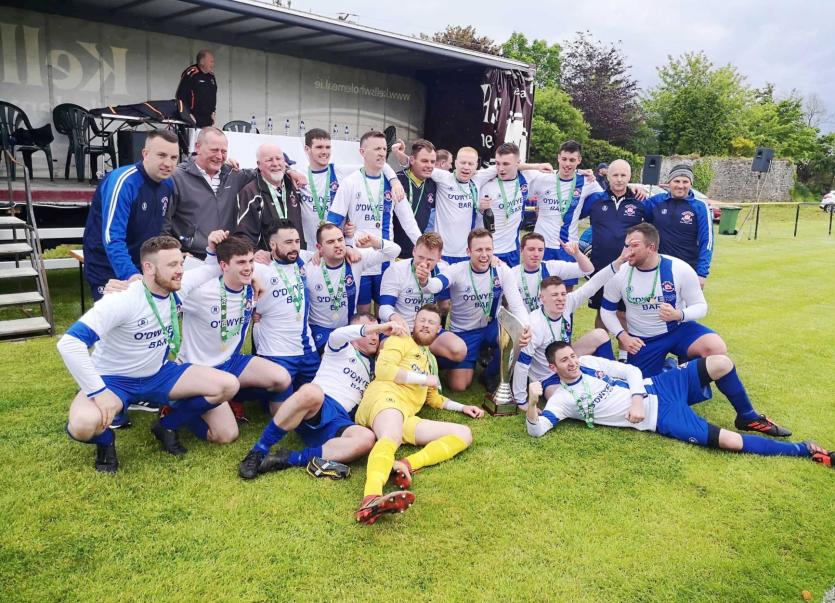 The Limerick DL players, represented by Janesboro, celebrate their Oscar Traynor Trophy final win over the Kilkenny League on Sunday

LIMERICK DL claimed the Oscar Traynor Trophy for the first time in 23 years thanks to a 1-0 win over the Kilkenny League on Sunday.

With a record in the competition of six wins and six losses going into the final of the Oscar Traynor Trophy versus the Kilkenny League on Sunday, we wondered whether number 13 would be unlucky or lucky.

As it turned out it was the latter as Limerick captured the coveted trophy for the first time in more than two decades with a 1-0 win over the home side.

Shane Clarke's goal after 22 minutes was all that separated the sides at the end of a tight affair to end many years of frustration and heartbreak.

Things looked bleak back in September when it looked as if Limerick would not have a side in the competition.

There is great credit due to the Janesboro club for stepping into the breach and send their side in as Limerick’s representatives.They had to juggle this with their efforts to secure their third League title and it worked a treat with the familiarity of the 'Boro players proving a real plus throughout the tournament.

Shane Clarke played the Captains part by being voted man of the match and while well deserved the award could have given to any of the Boro players. John Mulready dealt with everything that came his way. The back four were excellent with Danny O'Neill coming in for high praise from the opposition.

The selfless work rate of Mike Ryan in the middle of the park was uplifting while the silken skilled Niall Hanly proved the perfect foil.

Adrian Power was another whose non stop running help in attack and defence but the Captain had that something extra that allowed Limerick get the breakthrough to win the game.

Joint Manager Aidan Ryan with two winners medals in his collection now adds another as Manager, a boast to be proud of.

The sight of Conor Lynch getting an Oscar Traynor medal also warms the heart. The veteran striker, one of the best the City has seen, was part of the losing side in 2003 and it's only fitting that has should add this medal to his collection while the Clarke brother Thomas and Shane emulate their father, Tony who was part of the last successful Limerick side.

Limerick were out of the traps much faster than their opponents and could have scored twice in the opening 6 minutes.

Thomas Clarke's flick on to Niall Hanley ended at the feet of Adrian Power in the area but he was unable to get a proper connection and Owen Wall in the home goal saved.

Two minutes later good interplay by Limerick saw Shane Stack deliver for Shane Clarke who turned and hit but again Wall made a good save.

Kilkenny found their feet at this stage and Henry O’Neill placed a good ball across the face of the Limerick goal and David Rice racing in was inches away from providing the required touch.

Kilkenny obviously did not have their homework done on the Limerick side as they left Shane Clarke unmarked at a corner kick on 28 minutes when the striker rose to head Danny O'Neill's delivery to the back of the net.

Kilkenny responded well and David Mulcahy crossed to the back post where Dean Broaders sent a looping header that hit the angle of crossbar and post before being cleared.

Limerick had a similar effort minutes later when O'Neill crossed and Keith Mawdsley ghosted in at the back post but his effort skimmed the upright.

Tommy Earls sent a ball into the danger zone, Limerick failed to clear their lines and the ball fell to Henry O'Neill who hit a first time effort that was goal bound but for a goal line block by Thomas Clarke who followed up with a good clearance.

The second half was a more subdued affair and Limerick introduced Kevin Barry whose power caused the home side a whole new problem.

With 25 minutes to play Barry found Ryan Doherty who drilled the ball across goal and Clarke sliding in at the back post just missed.

Good work by Ryan saw the ball fall to Hanley 20 yards out and his rasping effort brought a full length save by Wall.

As expected the home side went all out for the equaliser but found the back line too tough to break although in the last minute it took a great block from Grincell by Hurley to ensure the win.

It is great to break that 23 year hoodoo and hopefully it is the start of more to come. This is not only a win for Janesboro but a win for all of Limerick soccer.