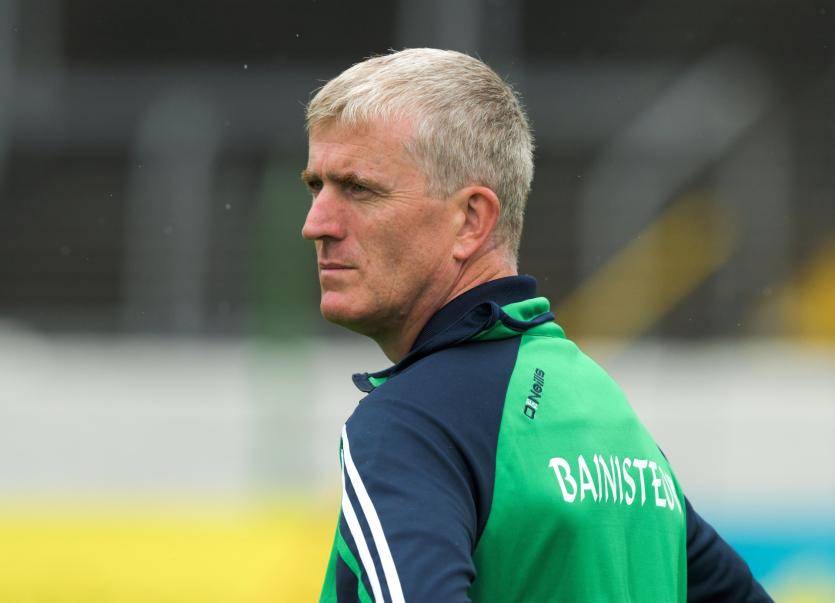 THERE is a spark in John Kiely's eyes as soon as the Munster Senior Hurling Championship is mentioned.

Nine months after ending a 45-year famine to lift the Liam MacCarthy Cup, Kiely leads Limerick into his third championship campaign this Sunday.

"To be honest while it was nice to have a good Spring, nothing compares to Championship and that’s the bottom line and our attention switched to May 19 very very quickly," stresses the Limerick manager.

"It (2018) was a wonderful thing to be part of but ultimately we are in sport because we want to be successful and win. I don’t want to win the match on May 19 any less than I wanted to win any match last year - in fact maybe I want to win it more!"

"There is a chance every day that you go out, to perform well and to be successful. I have seen nothing to lead me to think that these guys are anything but ambitious and hard working and when you have those two ingredients, you will give yourself a chance," he outlined.

Kiely added: "They will be working very hard to try and remain competitive for as long as they can".

What of Limerick as defending All-Ireland champions?

"It doesn’t change anything for me to be honest. That was then and this is now - that was the 2018 championship and has no bearing whatsoever on the 2019 championship. It’s seems like an eternity ago and will have no bearing. Ultimately we have four games and there are two points available in each game and we are going to fight for those points on each occasion."

Indeed Kiely is proud to carry the tag of champions.

"We have to cope with that - that was the whole point. We always wanted to be successful! Now that we have been successful and had a taste of it, we know it’s a hell of a lot better than what was going on the year before in 2017 - I particularly didn’t go home with a sweet taste in my mouth after that experience and it’s not one I want to go back to," he said.

"We have go to make sure we get our preparations right and get our focus right and put our best foot forward on May 19 and not look any further because Cork came down and beat us in the Gaelic Grounds in the league and that was a reflection of what can happen when the standard of your performance dips - you will get punished by these teams."

He explained: "We have a very competitive championship and it’s evenly balanced - on any given day, anybody can beat anybody else. We saw last year how much the width of a goalpost made in two matches".

On the field Limerick have already played 10 competitive games in the 2019 season and that's on top of the increased demands off the field that comes with the tag of All-Ireland champions.

"I am not one for shuttering it down for players - I think it’s a case of allowing them to explore different opportunities and experiences at different times," said Kiely.

"The players are maturing and every year they get more experience. They have been through so many experiences on and off the pitch and those experiences are all positive in terms of building their own self awareness, confidence and belief. They know as they progress through their careers there are going to be different experiences that will come their way and it’s how they handle and react to those will determine their growth as players and individuals. We have tried to spread the load across the group as best we can while at the same time not stifle opportunities for guys to explore different experiences that could lead to opportunities for them to meet people to progress their careers and make contacts or network," he outlined.

Limerick play Cork in the LIT Gaelic Grounds this Sunday (4pm) and then have a one week break before a run of games across three successive Sundays.

No schedule excuses from the Limerick manager.

"It’s all about perception. If you perceive to be in insurmountable task, it will be an insurmountable task. The challenge is laid down and we have three games at the back end of the championship but we will take them one game at a time - we have a strong panel and maybe we will use the panel a bit better and wiser than last year."

"It is what you make of it - having spoken to people who are involved in League of Ireland soccer, they play maybe five games in 20 days or seven games in 20 days in the case of Dundalk in Europe, the FAI Cup and Airtricity League and they get just three or four days to recover - tell them they got seven days to recover from a match and they would say this is an inordinate amount of time. They play 90-minutes and have only panels of 15-16 players and often 13-14 fit to get through."

He added: "If I had a learning from last year, I could have used more players during the course of the championship and that series of games."