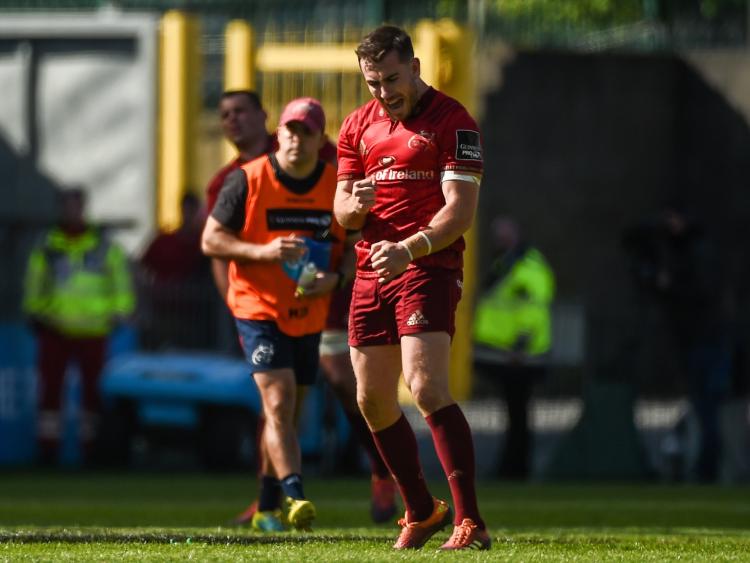 MUNSTER escaped to victory at Thomond Park this Saturday where the overwhelming pre-match favourites scored a nail-biting 15-13 victory over gallant Benetton Rugby in their Guinness PRO14 quarter-final play-off before an official attendance of 10,042 at a sun-kissed Thomond Park.

A smashing 76th minute penalty goal, kicked by replacement out-half JJ Hanrahan from the half-way line, earned Munster a semi-final showdown with arch rivals Leinster at the RDS on Saturday, May 18, 3pm.

On the evidence of this display from Munster, Heineken Champions Cup finalists Leinster will hardly be shaking in their boots at the prospect of facing their interprovincial rivals who were fortunate to edge past the Italians in ideal playing conditions.

Munster dominated territory and possession for large parts of the game, but lacked the cutting edge, guile and craft necessary to unlock an impressive Benetton defence.

The Italians managed the game's only try and could well have had a couple more, but for a couple of poor handling errors. Yet, at full-time, it was Munster who had reached a fourth Pro14 semi-final in the last five years. Strange game this rugby.

Munster were forced into two late changes from the side originally named as Keith Earls was a late withdrawal, with Darren Sweetnam taking his place on the left wing. Elsewhere, Liam O'Connor came onto the replacements' bench in place of Jeremy Loughman.

In sunny, dry conditions Munster signalled their intent from the kick-off, throwing the ball around and attacking wide at every opportunity.

However, the home side lacked a degree of composure and patience during the opening 10 minutes to capitalise fully on a number of promising moves.

Match stats showed the home side with as much as 70% possession and more than 80% territory in the opening quarter, but with scant reward to show for that endeavour on the scoreboard.

Munster did finally open their account in the 22nd minute when Tyler Bleyendaal converting a penalty from just inside the Italians' 10 metre line.

Munster have dominated possession & territory at Thomond but it is Benetton who go in ahead at the break after a brilliant finish from Ratuva Tavuyara. #GuinnessPRO14 pic.twitter.com/dM2OENLVE2

Munster continued to lack cutting edge in attack as the half progressed and the home side was stung just before the break when the visitors struck for the game's opening try.

Play-maker Allan added the conversion for good measure to help Benetton into a 10-3 interval lead.

Munster did score the opening points of the second period when Bleyendaal converted a 44th minute penalty after Benetton were penalised for hands in the ruck.

Back came Treviso, however, with a sparking move, involving backs and forwards, with full-back Hayward and winger Monty Ioane to the fore, before flanker Abraham Steyn knocked the ball on with open country ahead of him.

Benetton did stretch their lead back to seven points, 13-6, after 59 minutes, Allan landing a straight forward penalty from the Munster '22 after the home side was pinged for off-side.

Munster responded with a penalty of their own on 62 minutes when replacement JJ Hanrahan landed a crucial kick after Irne Herbst was penalised, 9-13.

The home side drew within a point of their opponents three minutes later when Hanrahan kicked his second effort from the tee as the penalty count against the Italians began to rise.

"The only thing that matters is that we won the game"@Munsterrugby Head Coach Johann van Graan was impressed with the resolve shown by his side to get the win today. #GuinnessPRO14 pic.twitter.com/N4lTDUikWs

And Munster got the opportunity to win the game in the 76th minute when Benetton infringed at the breakdown on half-way. The home side opted for a kick at goal. Hanrahan struck the ball superbly and it sailed between the posts.

The drama wasn't over yet however. Back came Benetton, who worked the ball up outside the Munster '22 and into position for a potential match-winning drop goal. However, Antonio Rizzi's effort flew right and wide as did an even later drop goal attempt from full-back Jayden Hayward.