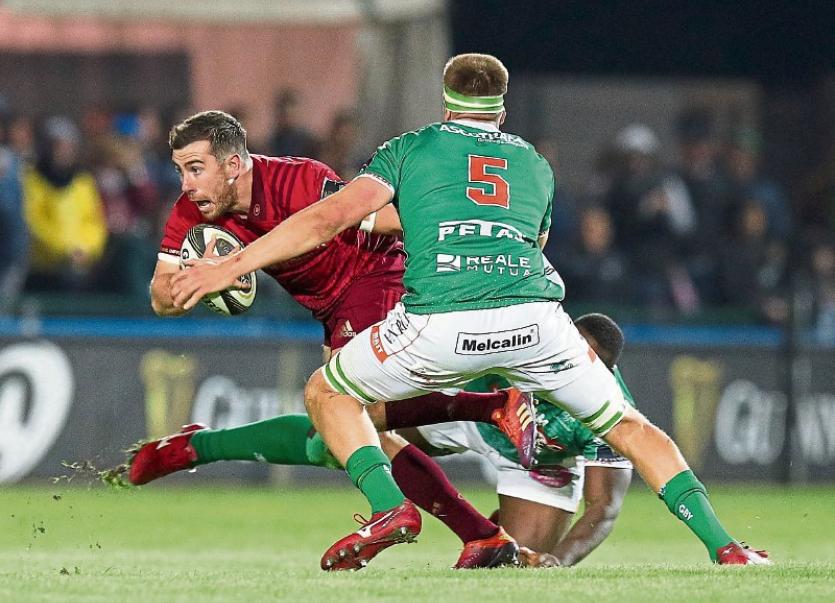 MUNSTER will look to set up a mouth-watering interprovincial clash with Leinster at the semi-final stage of the Guinness PRO14 for a second successive year, when tackling Benetton in their quarter-final tie at Thomond Park on Saturday, 3pm. (Live on EirSport)

Munster’s hopes of securing a direct passage into the semi-finals were scuppered on Saturday, despite their hard fought win over Connacht in their final regular season fixture, as Glasgow Warriors retained their grip on top spot in Conference ‘A’ with victory over Edinburgh.

Munster have been boosted ahead of Saturday’s quarter-final against Benetton with the return to training this week of three Ireland internationals, Conor Murray, Joey Carbery and Keith Earls.

Benetton Rugby have been the surprise packets of the Pro14 this season as the Italian side secured a third place finish in Conference B thanks to an impressive string of results.

Munster have not won silverware since their 2011 Celtic League final win and the province has run up a series of semi-final defeats in recent seasons.

Speaking at the province’s weekly press briefing at UL this week, Farrell said: “It (attack) is the last aspect of our game that really needs to kick on and really needs a little bit of work because everything else is so good.

“Our defence in general has been the best in the competition this season and our set-piece is working really well.

So if we can change our attack a slight bit, just to get a little bit more out of it and attack space in the right areas, more so than what we have been doing all season, then we definitely be a lot better.”

Farrell says he feels fresh heading into the business end of the Pro14 season as he has missed out on much of the season through injury.

A knee injury had kept him sidelined from March 2018 to November 2018.

“Yeah, I do feel fresh. It's hard to believe that it is knockout stages and if we lose this weekend, there might be no more rugby for a long time,” Farrell admitted.

“We have used 55 players in the entire competition, so it's not like anyone is completely drained and struggling to deal with what they have had to do all season.

We are fairly keen on keeping the season going as long as possible.”

Farrell says he has been pleased with how his move to Munster from Grenoble has worked out.

“It has gone well. Last season was particularly good until the injury, in terms of playing well in the Six Nations when I got my chance and then I would like to think I would have been involved in the Scotland game and possibly the England game after that, had I stayed injury free.

To have got a chance to get back in for this Six Nations was great, but I don't think I or the team, which is more important, performed as well as I or as much as I think I could have.

Munster's second row Jean Kleyn admits that the hangover from the Saracens loss is now over and that his side are focused on winning a trophy this season.

“I think that’s why last week was such a good thing. We all had time to work through our own emotional journeys about it. It’s always tough when you lose a play-off, it’s no fun and there’s not much you can do once the final whistle has gone so you just sit there and sort of wait.

“But we did a lot of work last week. We came in on Tuesday and said ‘look, we’ve lost a play-off, what’s done is done, there’s no use crying over spilt milk. What we do have now is an opportunity to win the PRO14’.

“At the start of the season it was our objective to win two trophies. Now we’re out of one competition so all of our focus is on the PRO14 and we’re literally going to do everything we can to win this competition” he added.

Should Munster overcome Benetton Rugby this Saturday, Farrell, Kleyn and their Munster team mates will lock horns with arch rivals Leinster in the semi-final on May 18 at the RDS, 3pm.