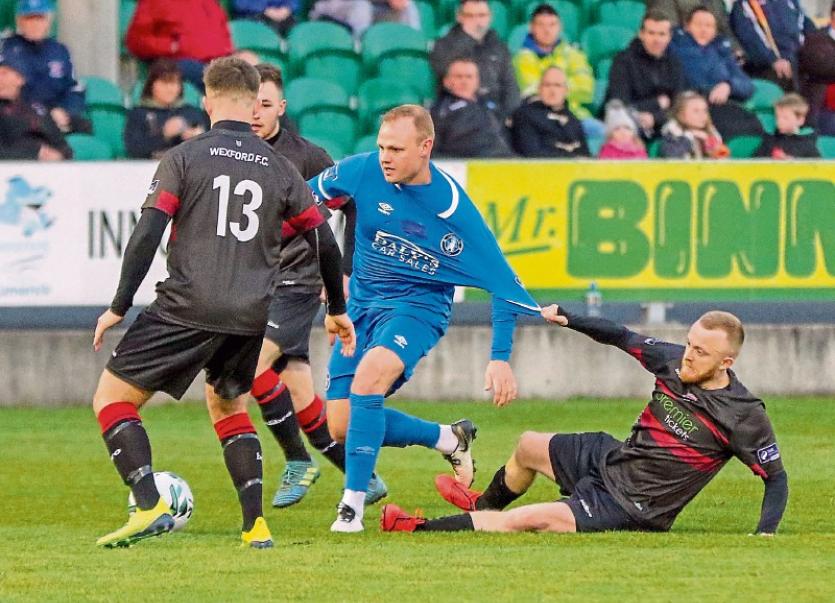 Limerick’s four-game winning run in the First Division was ended in their 1-1 draw with second-from-bottom placed Wexford FC at the Markets Field last weekend.

Darren Murphy scored the ‘Blues’ goal as the home side recovered from falling behind to grab a share of the spoils before an official attendance of just 585.

Ahead of the trip to Dublin on Good Friday, Blues boss Tommy Barrett is urging caution.

Tommy Barrett said: “We have to be realistic to where we are at. If we can keep it tight and pick up points, you don’t know what can happen. It’s a long way to go.”

“It’s a very close league. Wexford have beaten Bray and took points off us. They were unlucky against Longford and Drogheda.

The Blues boss said he was content overall with how things went against Wexford on Friday night, even though they couldn’t land the killer blow.

“It was difficult to break them down. We knew they were going to put 10 men behind the ball. They have done it against Drogheda and Longford in the last few weeks and both those teams scored late on.

“We didn’t move the ball quick enough, but it is difficult to play against. We still had a couple of chances where we should have won the game.

“Half-time for me was about keeping the concentration levels. We knew it was about stopping the set pieces and counter-attack but we got caught.

“I was happy with the response. We went up the pitch and scored straight away. We created a few chances after that but couldn’t get the winner.”

Friday night’s fixture away to Shelbourne is the first of two back-to-back away games for Limerick FC in the First Division.

The Blues face a trip to Longford on Friday, April 27, before playing their next home league fixture, a Friday, May 3 meeting with Bray Wanderers at the Markets Field.

Limerick’s upcoming opponents, unbeaten Longford currently sit on top of the First Division, two points clear of the Blues although the Midlanders also have a game in hand on the Markets Field side.