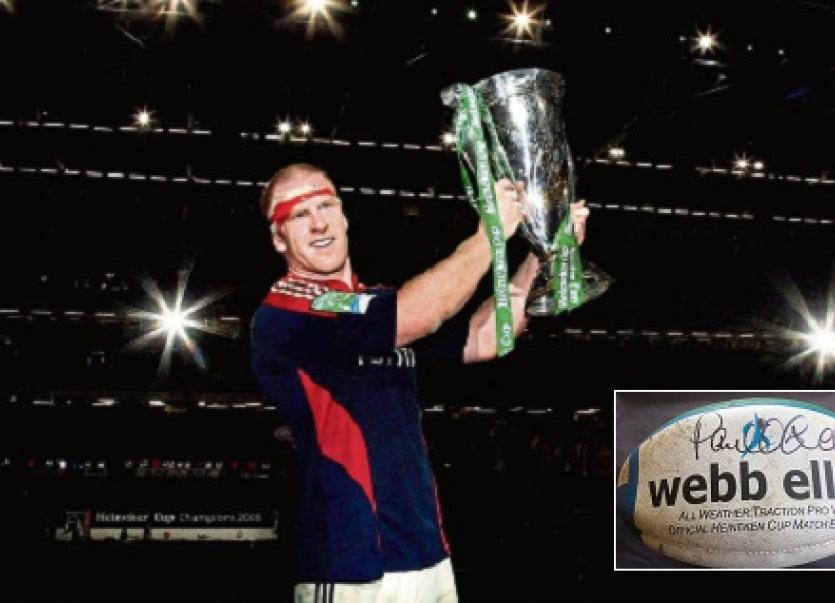 A unique match ball from Munster's 2008 Heineken Cup final win has been made available for a charity auction.

Funds raised will go towards the Help Fight the Big C fund-raiser.

Making the match ball all the more special is the autograph of winning captain Paul O'Connell.

"The ball was used during the 2008 Heineken Cup final in Cardiff between Munster and Toulouse which Munster won 16-13," explained Help Fight the Big C committee member Eoin Barry.

"The ball was kicked into the stands during the final and caught by a Limerick man. He has kept the ball in safe keeping for the last 11 years and in the meantime the captain of the team Paul O'Connell has autographed it," he outlined.

"It is a very special piece of Munster rugby memorabilia that has been given to us by an extremely generous donor. We have set a reserve on the ball and won't be selling below this price. Any bids can be made can be made by contacting myself on 086-1901507," Eoin Barry told the Limerick Leader.

Help Fight the Big C is raising funds for a number of charities - Brain Tumour Association of Ireland, Bru Columbanus which provides accommodation for the families of patients at University Hospital Cork; ACT, the Aid Cancer Treatment organisation which works to improve quality of life for cancer patients and BHOC, the Bandon Hyperbaric Oxygen Centre - BHOC has oxygen chambers which give patients large doses of oxygen which helps promote healing; Milford Hospice, Irish Cancer Society and the Jasmine Unit based in St Itas in Newcastle West.

The Help Fight the Big C fund-raiser was spearheaded by Mary Cregan, who died last month, just hours before she was to host a cancer fund-raiser in the Devon Inn Hotel. Mary was diagnosed with a brain tumour in 2016 and after treatment, went into remission. However, the tumour returned last autumn and in January Mary began to organise Help Fight the Big C to raise funds for the charities which had helped and supported her.

That event went ahead, but the unique Munster rugby memorabilia has since been donated to committee.