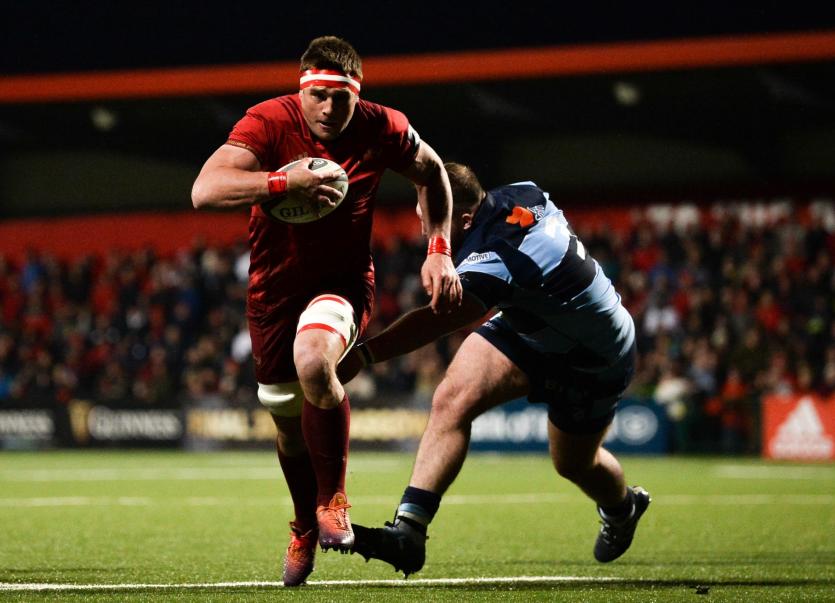 MUNSTER booked their place in the knock-out stages of the Guinness PRO14 with a 45-21 bonus point win over Cardiff before a sell-out attendance at Musgrave Park on Friday night.

Munster scored six tries in all, four in the second half, to avenge their heavy 37-13 defeat at the hands of the same opposition in Cardiff last September.

Munster were dealt a blow before kick-off as winger Keith Earls was forced to cry off after picking up a knock in the warm-up.

Munster led the Welsh side 17-14 at half-time as the sides shared four tries evenly in a lively opening 40 minutes.

Centre Chris Farrell and second row Jean Kleyn dotted down for Munster from close range. The home side had led 17-7 after half an hour. However, a try from flying Cardiff winger Aled Summerhill before the break added to scrum-half Tomes Williams' early effort.

Munster scrum half Conor Murray was forced to leave the field on 36 minutes for a HIA assessment as he was replaced by Alby Mathewson. Murray did return to action at the start of the second half.

Andrew Conway goes in at the corner, and Tyler Bleyendaal kicks the extras from the touchline.o#MUNvCBL #GuinnessPRO14 pic.twitter.com/fqURy58wlq

The home side ran in four second half tries through CJ Stander, who made a big impact off the bench, scrum-half Murray, winger Andrew Conway and replacement Sam Arnold.

Munster have now won their last 13 home games in all competitions and are unbeaten in their last nineteen at home since Leinster were victorious at Thomond Park at Christmas 2017.

"It came from a Cardiff turnover right on their own try line, and Munster hit the lead for the first time in the game."

"I thought our whole bench was really good tonight, it was a real 23-man effort."