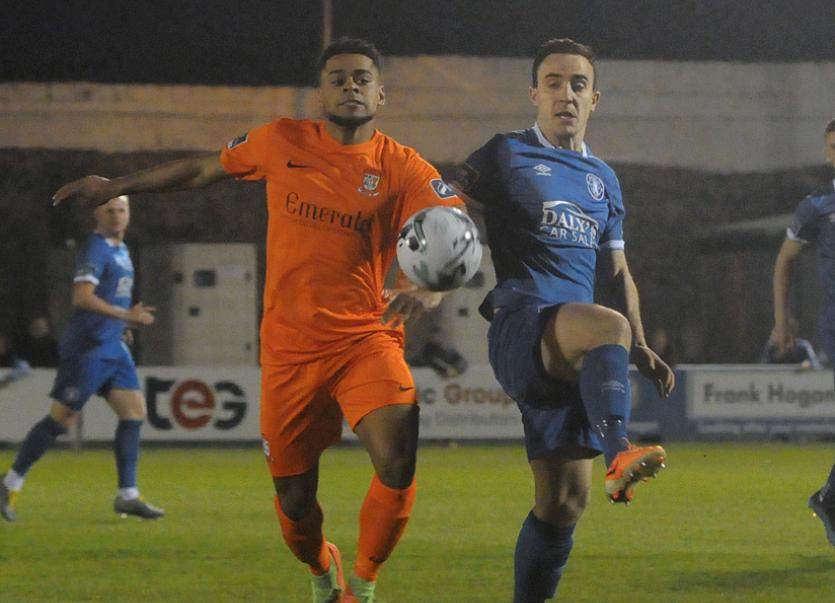 LIMERICK FC climbed into second spot in the SSE Airtricity League First Division with a convincing 2-0 win over Athlone Town before 647 spectators at the Markets Field on Friday night.

Tommy Barrett’s men were unchanged from their impressive win over Cabinteely last week, with Connor Ellis leading the line by himself.

This would be the basis for the flow of the game in the first half, too. While one up top certainly complements Limerick’s approach away from home, Ellis is an isolated figure when Limerick are having most of the ball.

Often drifting into channels to receive possession, Ellis simply isn’t that lone striker the Blues need in that shape, and Kieran Hanlon’s return to the XI will improve him exponentially.

But a positive for Tommy Barrett is that his charges did at least have the lion’s share of possession, and their lead goal did arrive just after the half-hour mark.

Shane Tracy had a free-kick on the right flank, which he swung in brilliantly. Athlone allowed the ball to bounce and it made its way into the top corner, past Aaron Myles.

Five minutes into the second half, Killian Brouder should have doubled the advantage but he inexplicably missed from five yards with Myles beaten.

As expected, the arrival of ‘Red’ Hanlon on the hour mark brought the game to life with Ellis playing on the flank.

However, it would be the impact of another substitute that fed Connor Ellis his third in three games, as clever footwork left the 21-year-old free. He took a touch to compose himself while one-on-one with Myles, and calmly slotted around him to seal the points with only a few minutes to play.