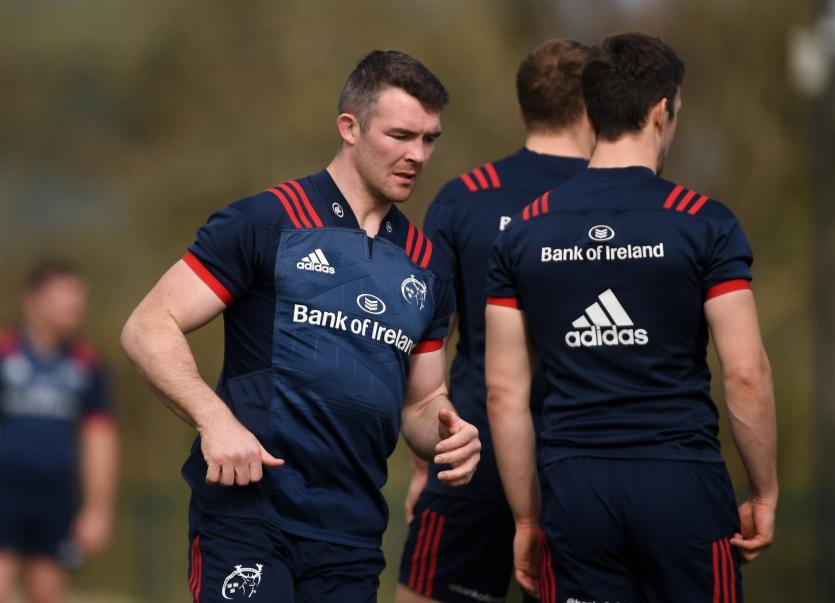 MUNSTER Rugby will be making a record 18th appearance in the quarter-finals of the Heineken Champions Cup when tackling Edinburgh at Murrayfield this Saturday lunchtime, 12.45pm.

While Munster are the bookies' favourites to win this weekend's quarter-final in the Scottihs capital, stats show that of the 88 quarter-final matches in the tournament to date, there have been 68 home wins (77% success rate) and just 20 away wins.

Head coach Johann van Graan is confident that Ireland out-half Joey Carbery will have recovered from a hamstring injury in time to take his place in the starting line-up for the game.

Munster captain Peter O'Mahony said he had learned over time how best to deal with a disappointment such as Ireland's last Six Nations performance against Wales in Cardiff.

“I’ve been in plenty of days like Cardiff. What you do, you have to get on with it. It’s not the ideal one because you don’t have one after it, but that’s life, that’s the game we play in.

“You take your few days off and spend a bit of time with the family and you’re back into a different family here and you get on with it.

“That’s the worst thing and great thing about rugby, we can get back with a group of guys we spend a lot of time with and it’s good to be back.”

O'Mahony admitted he was surprised by the reaction to Ireland's showing in the Six Nations.

"I think there was a strange reaction to some of the stuff that’s been going on for the last few weeks, to be honest, but that’s part of it. I mean, we’ve won 22 of the 25 games or something.

“I just felt there was a bit of a strange reaction to it but look, this is part of the game we’re in and I’ve certainly learned better over the last few years to say ‘right, that’s done now’. Because, as I said, it’s too big a week for me to be hanging around.

“I had a nice few days off, spent some time with the family and back in here to a great buzz. There’s a great buzz around here now, back into the lads.

“You can tell straight away when there’s Europe coming up. You come in the door of the place and there’s a great buzz always. It’s good to be back.”

Of the previous 13 Heineken Champions Cup quarter-finals Munster have won to date, four have been away from home.

Saturday's quarter-final will be televised live on Virgin Media 1, Channel 4 as well as on BT Sport.