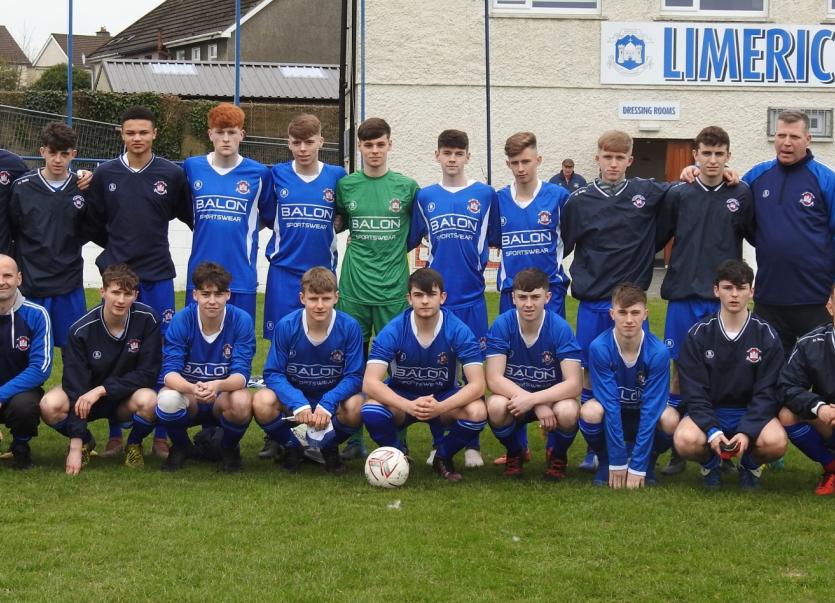 THE Limerick District League's Youth selection have qualified for the final of the Inter County Youth Trophy after a penalty shoot out win over the Inishowen League on Sunday afternoon.

The sides had finished deadlocked at 1-1 after extra time only for Limerick to advance to the decider 5-4 on penalties.

It looked like Limerick District were heading out until the 85th when Tyrique Leamy struck an equaliser to tale the game to extra time. Coolness personified marked the penalty takers and a couple of saves by Limerick keeper Kevin Walsh ensured Limerick take their place in the decider.

There was even better news for Limerick with the news that the final will be staged in Limerick where Waterford will provide the opposition.

This is the third time in four years that Martin Sugrue will have guided the League to the final and after a couple of heart breaking defeats it is hoped the third time lucky rule applies this time out.

Hill Celtic qualified for the last four of the prestigious Lawson Cup following an exciting tussle with their fellow Division 1 B side Newport at an impressive looking Hogan Park.

The first half was evenly fought but a Ken Nealon goal separated the sides at the break.

Nealon was to the fore again when he doubled Celtic’s lead in the second half but the Tipperary lads were not done and they showed great character to level the tie with goals from Paul and Sean Ryan.

Extra time was called for and that man again, Ken Nealon completed his hat trick to give Celtic a famous win.

As a reward Celtic will play the winners of Ballynanty Rvs and either Pike or Prospect. Janesboro play Fairview Rgs in the other semi final.

Janesboro opened up a seven point lead at the top of the Premier League when they stumbled to a 4-2 win over Kilmallock on Sunday morning.

Fielding no fewer than six B players, Kilmallock may have fooled ‘Boro into a false sense of security but when Eoin Burchill fired the county side in front the home side realised they were up against a game Kilmallock XI.

A fine goal from Shane Clarke saw the sides go in level at the break. Burchill restored Kilmallock’ lead after the restart before Keith Mawdsley levelled with a clever goal.

Shane Clarke put Boro in front for the first time midway through the second half and you felt they might push on to win with ease.

However the crossbar denied Thomas O’Shea a third goal for the visitors.

A rather nervy final few minutes were only eased when Danny O’Neill scored the insurance goal just before the end.

Seven points clear with four games to play keeps the Champions well in command but it looks like it might come down to the clash between the top two to decide the destination of the title.

Balla moved to within two points of second placed Pike Rvs with a 2-0 win over Geraldines.

The sides met last week when Dines came out tops in their Munster Junior clash so this was revenge in sort for the Blues.

Mike Guerin gave the home side the lead after just five minutes. Good defending kept the visitors at bay and Arron Nunan doubled their advanatge with 15 minutes remaining.

With little at stake Nenagh and Fairview threw up an entertaining game in Nenagh on Sunday.

Dan Butler was on the mark for the home side but a brace of goals from top scorer Robbie Kelleher was enough to give Fairview the spoils.

Despite their off field distraction, Regional proved too strong for a Carew Park, comprised most with youth players and a sprinkling of experienced.