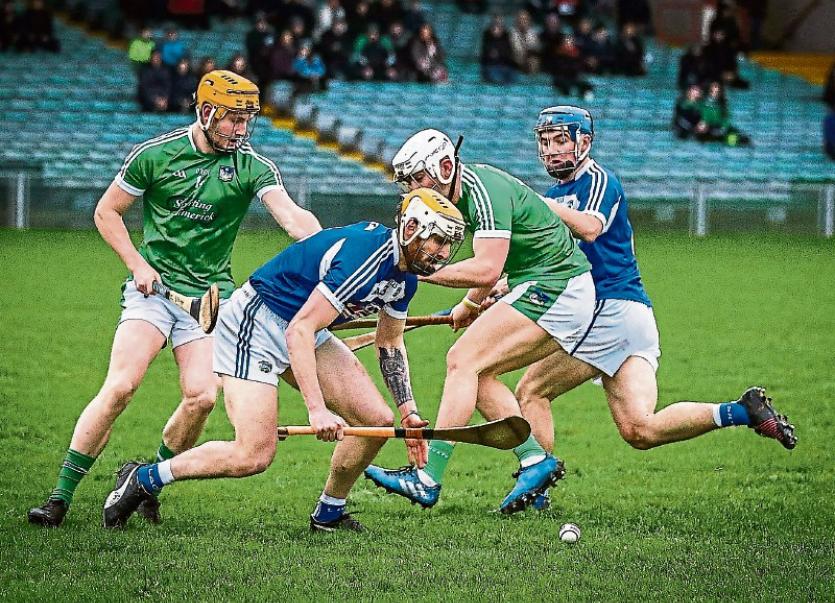 Leigh Bergin, Laois defender with his eye on the ball, under pressure from Aaron Gillane and Seamus Flanagan, when the sides met last season in the league

Limerick are on the road for the fourth time in six league games with Laois winning a coin toss to host the quarter final in O’Moore Park in Portlaoise this Saturday (7pm).

John Kiely’s men have beaten Clare, Cork and Dublin in the last three quarter finals and victory over Laois would book a March 23/24 semi final.

“There are only three games left in the competition and we want to get as much as we possibly can out of it. We will keep our focus for the week and try and go and work hard again,” said Limerick manager John Kiely.

“I thought they played exceptionally well and I was delighted with our lads today - we move on now to the closing phase of the knockout stage of this competition. We have three wins and a draw out of five games and that’s not too bad so we are happy with that,” said Kiely.

Saturday's game will be live on TG4 and will see Limerick face a Laois side that are now managed by former Kilkenny star Eddie Brennan. Back in 2017, Brennan was in charge of the Kilkenny U21 side beaten by Limerick in the All-Ireland final.

Fourteen of the Limerick players that saw action in that Thurles final are currently part of John Kiely’s panel.

Laois beat Offaly and drew with Carlow to confirm their first quarter final appearance since 2014.

On that occasion they also hosted the All-Ireland champions – losing to Clare by just three points.

Last year there were 10-points between Limerick and Joe McDonagh Cup side Laois in round one of Division 1B in the Gaelic Grounds. Another win for the men in green against the midlanders will secure a semi final spot where the opponents will be the winner of a quarter final between the fourth place Division 1A side and the top team in Division 1B.

With three rearranged final round group games on Sunday, the line-up for the 2020 group phase will then be complete. Limerick will be in Group A of the new-look league.

One certainty is that Limerick will be joined by the promoted team from Division 2A – the Joe Quaid managed Westmeath play Kerry in that final this Sunday in Ennis.