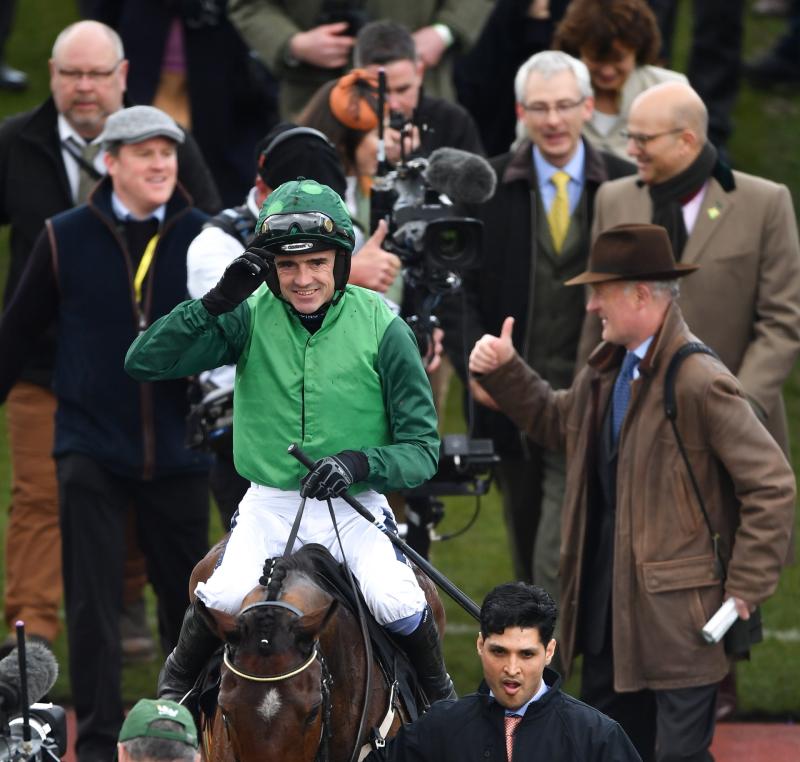 Trainer Willie Mullins gives the thumbs up after Footpad, with Ruby Walsh up, wins the Racing Post Arkle Challenge Trophy Steeplechase at the 2018 Cheltenham Festival

WHILE entries may be down on previous years, Willie Mullins  sends a very strong challenge to Cheltenham for the annual national hunt festival which begins next Tuesday, March 12.

Last year, about 60 horses left Closutton for the Cotswolds, but on this occasion, approximately forty are expected to compete for the Kilkenny man.Penhill, a winner from last year, is unfortunately one of those out but Mullins’ charges still ooze class.

“It’s been tough getting the horses out,” said Willie explaining that the mild spell we have been enjoying is not conducive to preparing horses for the major national hunt festival.

“We haven’t had a winter really and this makes it difficult in preparing horses. Cheltenham will always have a surface great for racing, but we will have runners who will   have enjoyed good going over here. You could have a horse that excels on good ground going over, and a spell of bad weather could upset his form.

“We have to be careful at looking at our winter form, and that has meant we have a smaller team than usual going over,” he added.

Going through the runners Willie is hoping for a step up  in form from Melon, and revealed that Faugheen is in “good order.” Also up against Faugheen is Bacardys, who fell at the last in 2018.

Of course Willie will be hoping to finally land the Gold Cup, and with Kemboy and Bellshill in particular, he certainly has a good chance

Taking it day by day, here’s some of the horses from Willie’s stables that he feels have a good chance to make an impression at Cheltenam.