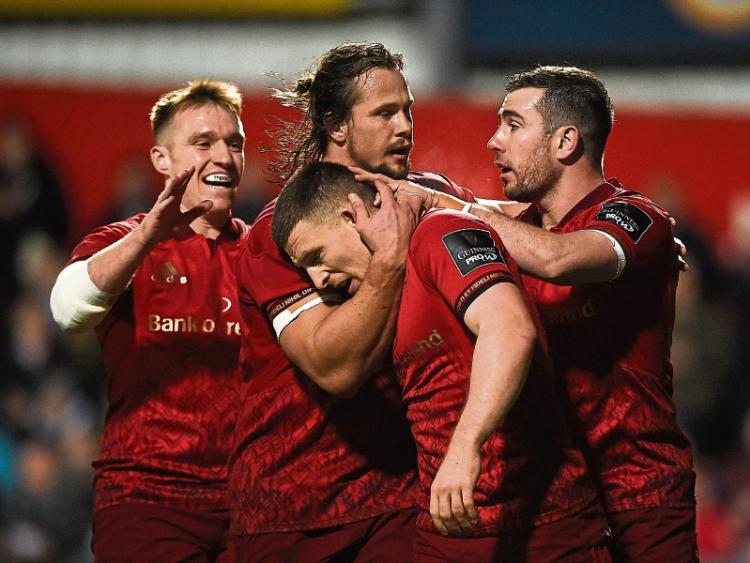 There are seven changes to the side that defeated Dragons in Munster’s last outing three weeks ago.

Irish internationals Andrew Conway, Chris Farrell, Niall Scannell, John Ryan and Billy Holland all return, while Tyler Bleyendaal captains the side in his first start at out-half this season with his three previous starts this campaign at inside centre.

Mike Haley starts at full-back with the aforementioned Conway and Darren Sweetnam named on the flanks.

Rory Scannell and Farrell start in the centres with Neil Cronin and Bleyendaal named in the half-backs.

Jeremy Loughman, Niall Scannell and Ryan pack down in the front row with Jean Kleyn and Holland in the engine room.

Fineen Wycherley, Chris Cloete and Arno Botha start in the back row to complete the side. Cloete makes his first appearance since sustaining a neck injury in December.

JJ Hanrahan has recovered from a hip injury sustained last month to take his place in the squad with Academy back-row forward Gavin Coombes also named among the replacements.

The clash sees Southern Kings visit Munster for the first time with the province leading the way in Conference A of the Guinness PRO14.

Following a day’s travel from Port Elizabeth to Cork earlier in the week ahead of Friday night encounter, the Isuzu Southern Kings have adjusted well to conditions since arriving in Ireland on Tuesday.

“It was a long travel – about 26 hours of travelling – but it was good,” Captain, JC Astle, said on Thursday.

“We managed to get a lot of training done last week, and on Monday before we left Port Elizabeth where we focused on the things we want to do against Munster.

“We had rain in PE on Monday which prepared us for the conditions in Ireland. We are experiencing some cold weather in Ireland, between 2 and 10-degrees. We have had no rain so far, but underfoot it is quite wet, but we are adjusting to get the feel of what it will be like on Friday night.”

The side is expecting a tough encounter against a strong Munster side that leads Conference A at the moment. A win for the South African side will boost their confidence for the remainder of the three-week tour which includes matches against defending champs, Leinster, and Welsh side, Cardiff Blues.

“Munster is a very clinical side and are on top of Conference A, so we are expecting a hard match with clinical, good players who know how to do their job,” added Astle.

“The aim of the tour, after we have had a few good games in the past few weeks, is to improve on that. Getting a good start. It will be nice to go into the last two matches of the tour with heightened confidence and giving stern competition to some good teams.”