'Environment has been created to repeat success' - Martin Kiely 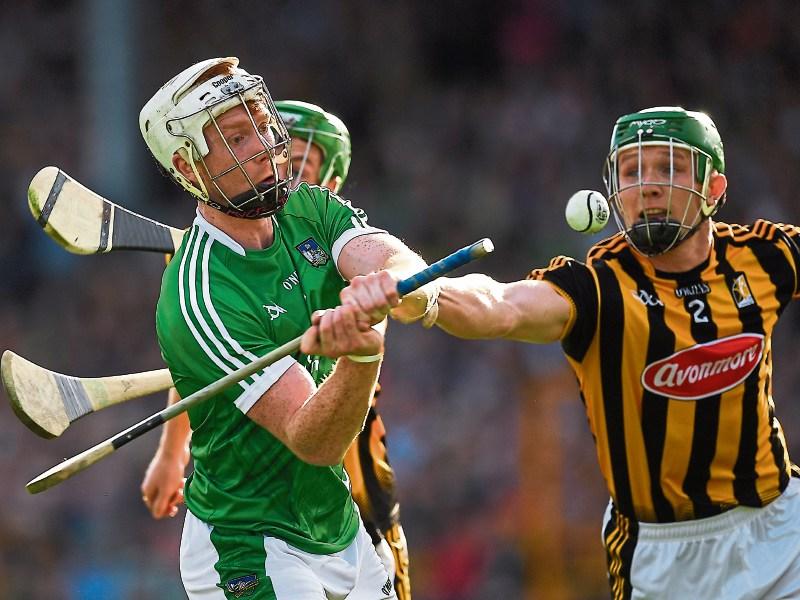 Cian Lynch of Limerick in action against Joey Holden, left, and Paul Murphy of Kilkenny when the sides met in 2017. Martin Kiely believes Limerick have learned a lot since then

We have reached the midway point in the Allianz Hurling league as Limerick travel to Nowlan Park on Sunday to play Kilkenny.

The midterm report on Limerick is very encouraging and their transition from championship to league has been very seamless.

They have gone about their business in a manner that shows this team wants more.

One of the hallmarks of Limerick now is their teamwork. They play as a unit and the movement of the ball from defence to attack is hugely efficient.

The way Limerick have their half forwards working has transformed how this area of the pitch is now played. Players go deep, they become half backs once the they pass midfield and many teams are now trying to play with the same formula.

It took Limerick eighteen months to master that game plan but they are now playing with sublime accuracy out of defence.

They might not be as efficient at the other end of the field. The amount of possession they have and the amount of shots they take should yield more scores but they are playing with a level of risk and it’s good to see that they are encouraged to have a go.

Kilkenny took Limerick to the limit in Thurles last year and while Brian Cody will be short some key men on Sunday he will still want a big performance against the All Ireland champions.

Nowlan Park is a hard venue to get a result in and Limerick will be mindful of the last time they played there. Limerick were a bit all over the place in that championship exit of 2017 but we now know that they learned a lot of lessons since then.

They were struggling to come to terms with the new style of hurling.

I have seen Kilkenny in their opening two games in the league and those young lads that tasted championship for the first time last year have developed well. I like the look of them and it will take a lot of good hurling to beat them come championship later this year.

One of the features I really like about Limerick at the moment is how they are able to cope with what ever is presented to them.

These qualities are associated with more experienced teams but with an average age of just twenty three Limerick are showing great maturity.

Limerick have one of the best equipped squads in the country now. They have power and pace in all positions but they are exceptionally strong in both the half forward and half backline..

The middle eight players are working very hard and will take a lot from teams to break them down. Of course they will be challenged in the weeks and months ahead but as a unit I feel Limerick are showing all the signs of a team that can follow up on last year.

The management can be really happy with how they have set such early terms in 2019.

They have managed to restore the values, work rate and honesty that saw such rewards last year and that is a huge credit to them because counties that win after such a long famine rarely manage to follow the road map of the previous year.

The fitness and conditioning levels in the Limerick senior team are superb and they are showing no signs of fatigue or energy loss.

The type of game they play demands a lot from the players and only those that can match such requirements have a chance of starting on this team.

Some players are less mobile and struggle with the running game and for that reason they will struggle to feature as much. This league so far has allowed some players get an opportunity and many of them have been impressive. That is good for them but more importantly it’s good for the overall strength of the team.

A team that works really hard becomes very difficult to beat and Limerick have set their stall on such a foundation.

There was a time when Limerick teams were set up around a few players but that is what makes this team very different.

They are playing for each other, they are not selfish and they are always trying to find the player in a better position. That sort of mindset will make them very difficult to beat.

This game against Kilkenny will be very interesting, Cody will ask a lot of questions of his charges this week and he will want them to perform next Sunday.

They don’t lose too many games in Nowlan Park and he will remind them of that. Knowing Brian Cody he will want to land a few markers for possible encounters in the year ahead.

Kilkenny will be a great deal more settled this year. It looks like Huw Lawlor could make it at full back and that will release Padraigh Walsh to the half backline. Billy Ryan and John Donnelly will add some steal to the attack.

In the past it was very difficult for young Limerick players to develop at senior level. They really didn’t get a chance and were expected to arrive on day one.

So far Limerick have started around eleven of their All Ireland winning team.

Players are getting opportunities and it’s a great deal easier to perform when you have strength around you.

Take young Conor Boylan for example who played against Tipperary. He did really well, he scored, he worked hard and didn’t at all look out of place.

The environment in the Limerick set up now is a place where players can prosper and develop. Such an environment will see some established players struggle and unable to match the hunger of the young cubs that want to take their places.

Right now it’s a case of work hard or harder or risk the prospect of being left behind. Such conditions are created and the management can take full marks in this regard.

At the height of his powers Brian Cody produced his teams to win in the league and championship. You could argue that it’s a bit different now given the changes in the championship but his view was that better to have them winning than loosing.

I think Limerick have the capacity to go after the league and I wouldn’t be at all surprised if John Kiely has a right go at it. It will allow the players hoping to get into the team more game time but more importantly for him how they will react under pressure.

It’s a great pity that David Reidy picked up an injury because he would have featured in games up to now in the league.

It will be really difficult to reap the success of last year but what I have seen so far would lead you to believe that anything is possible with this group of players.

I am impressed by the attitude they dished out so far. They are a grounded bunch that have set high targets for themselves.

Winning once requires players to travel a long and hard road but to repeat it requires them to climb mountains never seen before.

The game against Kilkenny will be close but it’s one that John Kiely will want to win.

He will know the value of such a win in Nowlan Park and I expect his side to come home with another brace of points and make it three wins from three.