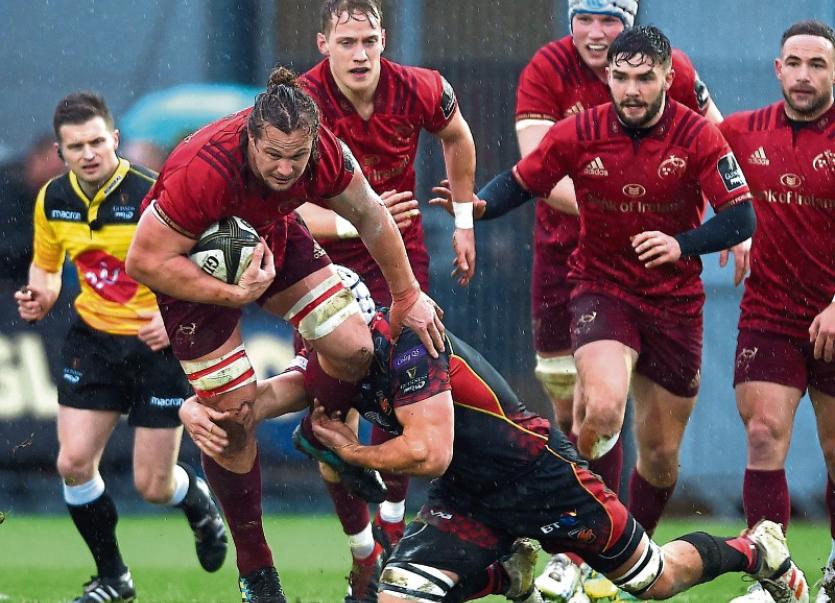 MUNSTER made it five wins on the bounce against the Dragons when scoring a hard fought 8-7 victory over the Welsh region in an error strewn Guinness PRO14 clash at a wet Rodney Parade on Saturday afternoon.

A second half try from second-row Jean Kleyn helped Munster grind out a precious win over the Dragons which keeps them two points clear of Glasgow at the top of Conference A of the PRO14.

The win, although far from pretty, ensures Munster finish off a key 10-game section of their season with a precious four points.

Munster, with 13 changes from the side which beat Exeter in the Champions Cup just seven days earlier, struggled to gain the upperhand in an arm wrestle of a game.

In persistent heavy drizzle, Dragons took the lead with a 14th minute try from tighthead prop Lloyd Fairbrother when he bustled over from close-range, while out-half Josh Lewis converted for a 7-0 advantage.

Both sides were more than happy to engage in regular bouts of kicking, which didn’t do much for the contest as a spectacle.

Munster managed to open their account with virtually their first visit inside the Dragons ‘22 when the visitors were awarded a 29th minute penalty which out-half Bill Johnston duly sent sailing between the posts.

Jean Kleyn gets the ball over the line to put @Munsterrugby ahead.

Dragons had bossed the territory stats 71%-29% during that opening half an hour of the game.

However, despite the hosts dominating territory, Munster came within a whisker of scoring a try on the stroke of half-time when Stephen Archer powered over from close range but the score was chalked off by the TMO for a double movement. It looked a tough call against the visitors’ tighthead prop.

As a result, Munster trailed by four points, 3-7, at half-time.

Was it a try?@stringer9 thinks the questions asked by the referee should have led to a try being awarded to Munster.

After Dragons had second-row Matthew Screech sin-binned in the third quarter, Munster went in front on 62 minutes.

The quick-thinking Bil Johnston opted for a tap penalty from inside the Dragons ‘22 which caught the home side's defence napping. Johnston, in turn found full-back Mike Haley, who made an excellent carry up towards the tryline, before second-row Jean Kleyn burrowed his way over from close range.

While Johnston was off target with the difficult conversion, Munster now led the game 8-7. It was a lead Munster held until full-time as the visitors emptied the bench in the final quarter.

"Munster will be delighted, its a tough place to go"

It wasn't pretty but Munster get the win in Rodney Parade.