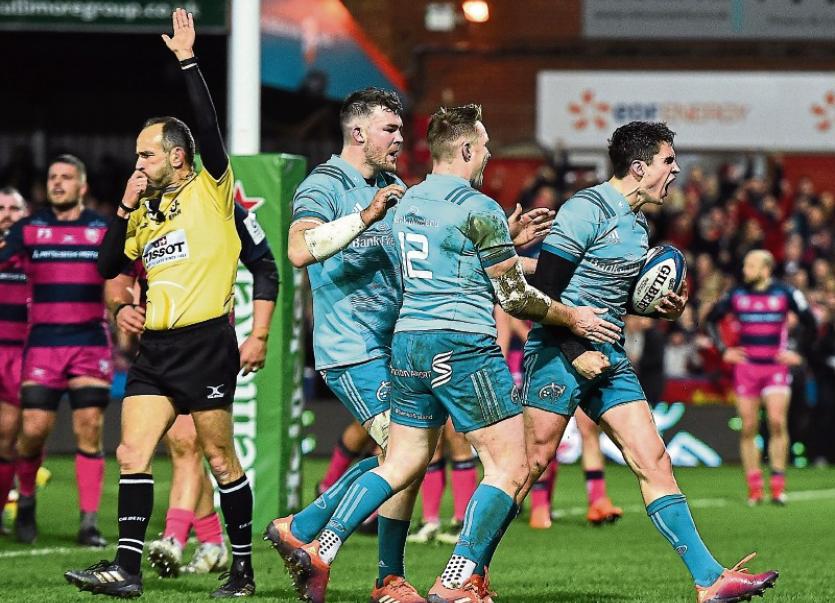 Man of the Match Joey Carbery, right, celebrates after scoring the first of his two tries in Munster's bonus point win over Gloucester in the Champions Cup at Kingsholm on Friday night

Munster scored five tries, including a brace for Man of the Match Joey Carbery, as Johann van Graan’s side made it six successive wins over the Cherry and Whites in Europe.

Fly-half Carbery bagged a hugely impressive 26 points in all as Munster cemented their place at the top of Pool 2.

Munster, took a commanding 17-point lead into half-time, 20-3, after the visitors scored two first half tries.

Munster made big gains off Conor Murray’s pin-point box-kicks, with the Gloucester back-three struggling under the high ball.

The crucial score of the half arrived with the clock in the red zone after centre Rory Scannell powered over for a terrific try after Munster racked up 26 phases with superb ball retention, discipline and patience.

Peter O'Mahony is up for this! pic.twitter.com/ggzK3pdftD

Munster added three further tries in the second half from play-maker Carbery, Keith Earls and Andrew Conway to seal a resounding win.

The one downside for Munster was the rip injury sustained by team captain Peter O'Mahony in the second half which forced the flanker to be replaced.

After 20+ phases with the clock in the Red, Munster land a hammer blow!

Rory Scannell caps off a great first half for the visitors pic.twitter.com/sfn8nHc4es

Munster complete their programme of Champions Cup pool fixture with a home tie against Exeter Chiefs at a ‘sold-out’ Thomond Park on Saturday, January 19, 5.30pm.

Joey Carbery is the man of the moment

A devastating couple of minutes! pic.twitter.com/M8IFep63PG