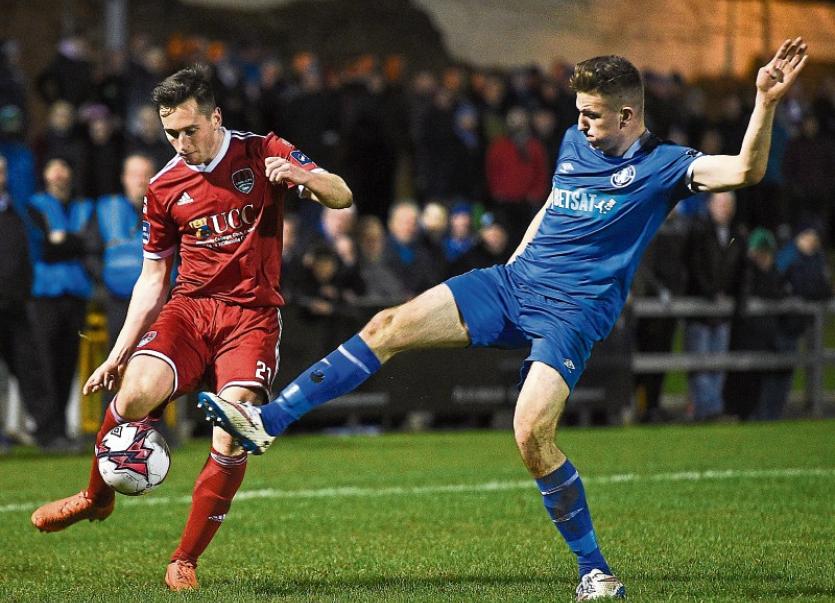 Limerick FCs Connor Ellis in action against Conor McCarthy, of Cork City, in their Premier Division fixture at the Markets Field last March

Relegated Limerick, who returned to pre-season training last weekend, are due to face Premier Division runners-up Cork City in the first of their pre-season fixtures at The Farm, UCC, this Saturday, 2pm.

Tommy Barrett’s charges will then renew rivalry with Finn Harps, the side which relegated the Shannonsiders from the Premier Division at the end of last season, at the FAIs National Training Centre on Saturday, January 19 at 5pm.

Limerick are also due to face premier Division Waterford at the RSC on Sunday, January 27 at a time to be confirmed.

The Blues, who are set to be part-time this season, have confirmed that 13 players to date have been signed for the 2019 First Division campaign.

Relegated Limerick will kick-off life back in the First Division with a home fixture against Longford Town on Friday, February 22, 7.45pm.

However, Earley confirmed on Monday night that he would no longer be taking up the role with the newly relegated First Division side.

Earley tweeted: “After two months of takeover discussions on behalf of a US based investment company, to purchase Limerick FC which would have cleared debts and secured the future of the club, I was offered and accepted the role of General Manager of Limerick FC starting last Thursday.

“Unfortunately in the past number of days those discussions have broken down irretrievably and I will not be continuing with the role. I wish the many excellent staff and volunteers involved with the club the very best of luck for the season ahead.”