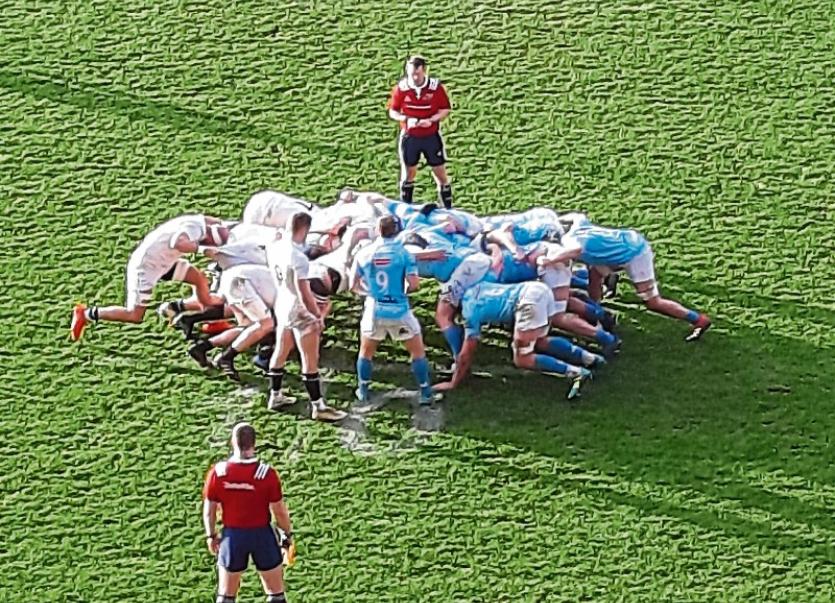 GARRYOWEN’S dream of retaining the Bank of Ireland Munster Senior Cup were shattered by a clinical Cork Constitution side who recorded a deserved 26-23 success at Thomond Park on Saturday.

All-Ireland League Division 1A leaders Con were good value for this win in the 128th Munster Senior Cup final when the Leesiders outscored the 2018 provincial cup winners by three tries to two.

Garryowen had trailed by 10 points, 16-26, deep in added time when the ‘Light Blues’ got over a late consolation try for winger Liam Coombes, which out-half Ben Healy converted.

However, despite Garryowen's never-say-die attitude, there was no doubting Cork Con’s superiority on the day.

This was Con’s 29th Munster Senior Cup success against a Garryowen side who were seeking to win the competition for the 40th time. Con had also completed a five-in-a-row of Munster Senior Cup wins between 2013 and 2017, only for Garryowen to end their run in last season's semi-final.

A cohesive Cork Con unit was clinical in attack, making the most of their attacking opportunities with flanker Joseph McSwiney helping himself to a brace of tries.

The Leesiders succeeded in consistently retaining possession, winning the collision area and building phases and pressure.

Garryowen, who included Munster players, scrum-half Neil Cronin and back-row Conor Oliver in their starting team, made far too many errors, as well as lacking a crucial degree of composure and cutting edge in the attacking zone.

Garryowen, who had beaten Shannon and Young Munster in the previous rounds, opened the scoring as early as the third minute when their 2018 Munster Schools Senior Cup winning captain at Glenstal Abbey Ben Healy slotted a 30 metre penalty goal for a 3-0 advantage.

Cork Con responded almost immediately, with flanker Joe McSwiney burrowing over from close range after the Leesiders had opted for a kick to the corner off a penalty awarded for a high tackle.

Aidan Moynihan’s conversion attempt collided with the upright before bouncing down.

Cork Con had the chance to increase their advantage in the 11th minute when Garryowen were penalised at scrum time. However, winger Sean French was just off target with a penalty kick from half way.

Winger French struck for a second Con try soon after he took advantage of some slack defence, darting down the right wing, before crossing in the corner.

The Con lead was now 10-3. Garryowen hit back quickly with Healy’s second penalty in the 19th minute reducing the deficit to four points, 6-10, with another well struck penalty.

Garryowen had the opportunity to eat further into Cork Con’s lead on 25 minutes when awarded a penalty goal in front of their opponents posts. However, the Dooradoyle side opted for a scrum, rather than a kick at goal. The option proved the wrong one on this occasion, however, as Con won a penalty off the set-piece.

Undettered, however, Garryowen attacked soon after and this time, when awarded a kickable penalty the Limerick side opted for a kick at goal, with Healy again on target off the tee for 10-9.

The see-saw nature of the scoring continued at the half hour mark when Cork Con hit back with a penalty goal from the boot of Aidan Moynihan.

Garryowen did finish the half strongly, but another decision to opt for the corner back-fired when the Limerick side was pinged for a crooked throw to the line-out.

Soon after Con were reduced to 14 players when number eight Luke Cahill was yellow carded on the advice of a touch judge. Garryowen again went to the corner with the resultant penalty, this time winning the line-out. However, a lack of composure inside the Leesiders’ ‘22 saw a Garryowen player knock the ball on allowing Con the opportunity to clear their lines.

Constitution retained their half-time advantage at four points, 13-9, at the interval.

With Cahill still off the field for Con, Garryowen hit the front after 47 minutes when winger Cian O’Shea struck for an opportunist try beating the Cork Con defence to the touchdown after the ‘Light Blues’ forced a turnover in midfield and the ball was fly kicked forward by the tryscorer.

Healy duly added the extras and suddenly the holders were leading 16-13.

Cork Con’ hit back once more, however, and after Garryowen were pinged for off-side deep inside their own ‘22, out-half Moynihan duly landed thee resultant penalty to tie the scores at 16-16 after 54 minutes.

And the Cork side hit the front on the hour mark when flanker McSwiney struck for his second try of the game from close range. Moynihan’s conversion made it 23-16 to the All-Ireland League Division 1A leaders.

Cork Con tightened their grip on the game in the 70th minute when Moynihan landed a further penalty goal from outside the Garryowen ‘22.

To their credit, Garryowen battled right to the end and their endavour was rewarded when winger Liam Coombes touched down in the right corner in the 10th minute of injury time. Healy aded a superb conversion.

Cork Con are 13 points clear of Garryowen in the AIL Division 1A table and on the evidence of this Cup final, the Temple Hill side look well-placed for top honours this season.

Garryowen must regroup quickly now as the ‘Light Blues’ host Lansdowne in the semi-final of the Bateman Cup on Saturday next at Dooradoyle.