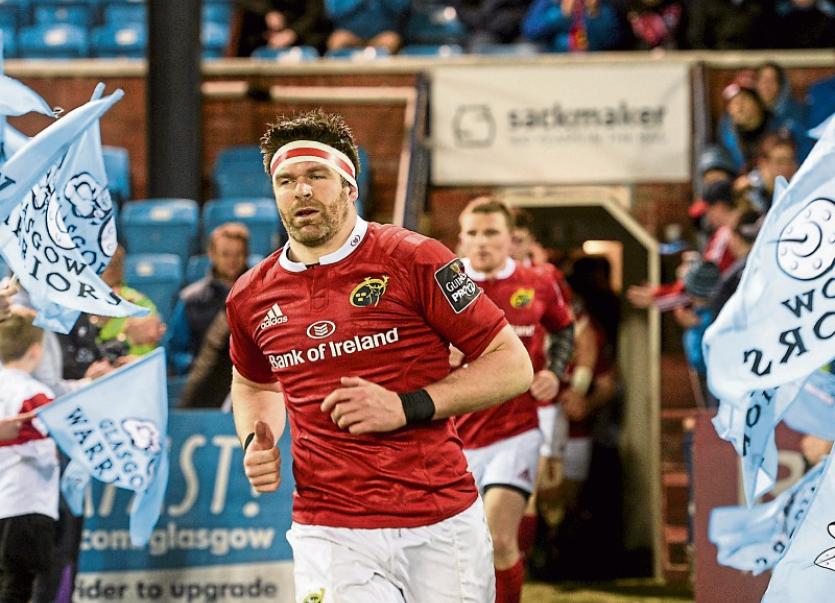 Billy Holland is due to make his 200th Munster appearance in Saturday's Guinness PRO14 clash with Connacht at the Sportsground, 7.35pm

MUNSTER second-row Billy Holland, in line to win his 200th cap for the province against Connacht next weekend, revealed how he tossed a coin a number of times to decide whether he should take up a contract offer from the UK some years back.

Holland was finding gametime hard to come by in the marquee Munster fixtures back then, as he competed against the likes of Paul O’Connell, Donncha O’Callaghan, Mick O’Driscoll and Donnacha Ryan for a slot in the second-row, while he was vying with the likes of David Wallace, Alan Quinlan, Denis Leamy and James Coughlan for back-row spots.

Holland, who made his Munster debut against the Scarlets back in 2007, said: “It was like that I’d play (for Munster) during the Six Nations, I’d play during the autumn internationals, I’d play the first two games of the season, but with Paulie, Micko, Donncha, Donnacha Ryan ahead of me.

“I played a lot in the back-row at the start and you had Quinny, James Coughlan, Wally, Leamy, you know there was incredible competition there so. We had a smaller squad, we have a huge squad at the moment but we had a smaller squad and I was in the Academy then and you were probably involved a bit more and you were brought in for those Six Nations games and autumn games. There was always three Munster second rows up with Ireland Donners, Paulie and Micko at that time were always up with Ireland so there was opportunity while they were away.

“It’s your dream at the start, you’re achieving your dream and you’re playing for Munster, you’re putting on the red jersey you’re training with your heroes and you progress and you get more and more games and feel like you are doing better, but I wasn’t always getting the same amount of game time as I wanted and it probably would have been around 2010/11/12 my contract was up and I was very close to going to a club in the UK.

“I went over to the grounds and everything I said the night before I had to decide I’d toss a coin and it landed on the side to go to the club in the UK so I tossed it another 49 times!

“I wouldn’t be much of a gambler I must say but I think it ended up 26-24 to stay at Munster. There were a lot of other considerations. My family were all in Cork and Ireland and my now wife was in Ireland so you know it wasn’t just the rugby, there was more to it.

“I’d be quite stubborn and determined as well. I felt like I hadn’t done what I could do with Munster and I wasn’t prepared to leave until I had achieved some of my goals. I had achieved one, which was to play for Munster, but nothing else.

“I’ve always had a contract on the table (from Munster), but you know there comes a stage where are you going to play rugby do you need to go away to develop and I was probably a little bit too old I felt to go away and come back again so I was in that Catch 22.

“I stayed and Axel’s (Anthony Foley’s) first season as a coach I got a few games where we had that dark December where we lost five games in a row and didn’t get a bonus point in any one of them.

“I had just come back from breaking my ankle with the Emerging Ireland tour and I started against Ulster away actually and we won. We were about to set a record for the most losses ever and I started every game more or less for the next two, two and a half years.”

Munster face their third and final Guinness PRO14 interprovincial over the festive period this Saturday when they travel to Galway to take on Connacht at the Sportsground at 7.35pm.