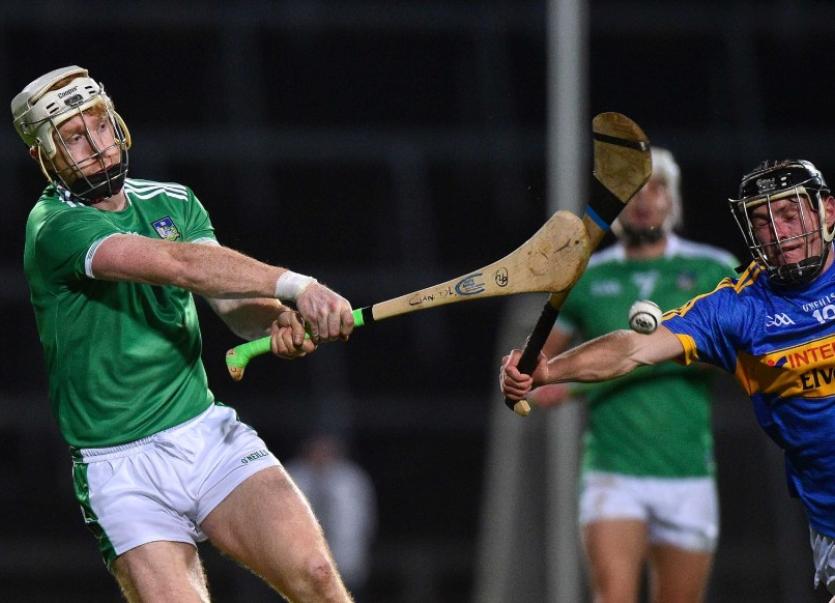 Cian Lynch strikes ahead of a Colin English block

DEFEAT for Limerick in their first competitive fixture as All-Ireland champions in this Friday evening's Co-Op Superstores Munster Hurling League tie with Tipperary.

In Liam Sheedy's first game back as Tipperary champions, his side were 4-14 to 2-17 winners in the Gaelic Grounds.

Watched by 3,224 Limerick paid the cost for conceding four goals and at times it was clear that the All-Ireland champions have little hurling preparation ahead of this early season provincial competition.

It's the first time in seven years that Limerick lost their opening game of a season but it hardly concern John Kiely and his management after a history-making 2018 season.

John Kiely's men now move onto round two next Thursday against Kerry in Tralee.

Limerick started with eight of their All-Ireland winning team and in the course of the game handed a debut to one of the 2019 newcomers Conor Boylan of Na Piarsaigh.

Tipperary afforded All-Ireland champions Limerick a Guard of Honour but the visitors to the Gaelic Grounds were to be 3-6 to 0-11 ahead at half time.

It was a half that saw Limerick hit 11 wides and Tipperary eight. The game ended with 13 for Limerick and 14 to Tipperary.

Limerick had all bar two of the 0-11 from play, while Tipperary were four points clear despite scoring just 2-2 from play in the half.

The sides were level on four occasions but two goals in the final five minutes ensured Tipperary were ahead at the break.

Liam Sheedy's men hit the ground running and Seamus Callanan goaled from a penalty after 60-seconds.

But Limerick hit back with Barry O'Connell, David Reidy and Colin Ryan levelling for the first time with four minutes gone.

It was 13-minutes before the first Tipperary score from play and that had them 1-3 to 0-5 ahead.

It was the 29th minute when Limerick were ahead for the first time - Limerick 0-9, Tipperary 1-5 with Colin Ryan notching his third point.

Quick-fire goals from Callanan and Mark Kehoe had Tipperary 3-6 to 0-9 ahead before a third of the evening for David Reidy and one for Andrew La Touche Cosgrave finished out the scoring in the half.

Tipperary stretched the lead on the resumption when half time substitute Patrick Bonner Maher goaled after two minutes.

An Aaron Gillane free was the only Limerick score of the opening 10-minutes as the men in blue and gold moved 4-9 to 0-12 clear.

Then came a David Reidy goal to provide Limerick spark.

The lead was soon down to four points with further Gillane frees and a second O'Connell point - 1-18 to 4-10 entering the final quarter.

But Limerick didn't continue to build on that momentum and Tipperary were 4-14 to 1-15 ahead with six minutes to play.

There was a late Gillane goal but no comeback for the men in green, who were wearing their new jerseys for the first time.