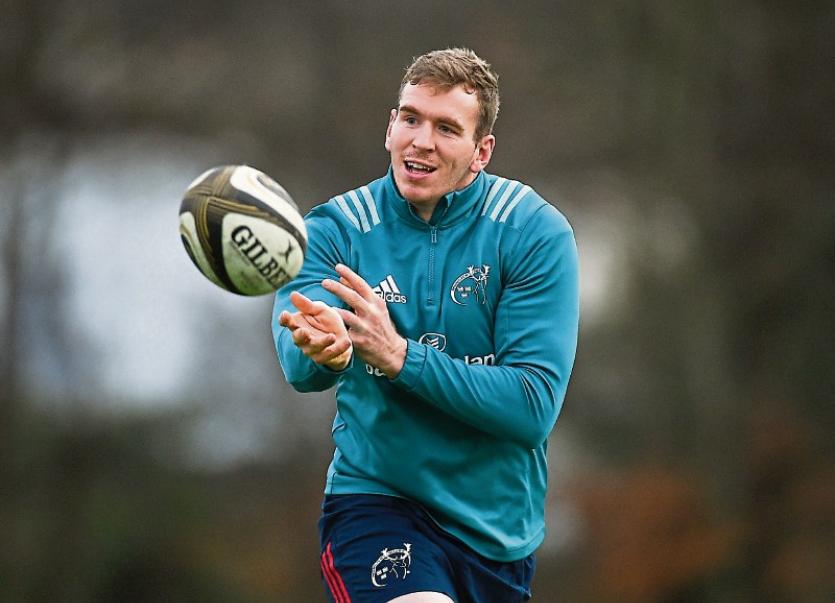 FIT-AGAIN Munster and Ireland centre Chris Farrell says the province’s returned Ireland internationals have brought a ‘massive buzz’ to the squad ahead of crucial upcoming fixtures in the Guinness PRO14 and Heineken Champions Cup.

Munster players key roles roles in ensuring Joe Schmidt’s Ireland side won all four of their November internationals, including an historic first ever home success over New Zealand.

Farrell returned from a serious knee injury, sustained in Ireland camp during that season’s 6 Nations last February, when sprung from the replacements' bench in Munster’s bonus point win over Zebre in Parma in Sunday last.

Three-time capped Ireland international Farrell will make his first start of the season for Munster in this Friday night’s crucial PRO14 clash with Edinburgh at Musgrave Park, 7.35pm, live on eirSport.

Twenty five-year-old Farrell says the excitement around the full squad this week will continue into the back-to-back Champions Cup pool fixtures with Castres Olympique in December.

Farrell said: “We were up in the auditorium in the team meeting at the HPC (High Performance Centre) in UL (this week) and for the last two, three weeks it’s been quite and there’s been a few spares seats and where I sit it’s been quite sparsely populated because I sit close to Killer (Dave Kilcoyne) and (Andrew) Conway and Niall Scannell is behind me and I’ve been sitting on my own pretty much for the last three weeks.

Farrell was relieved to finally get back on the pitch last weekend following eight months out with his serious knee injury.

“It’s been eight and a half months since I played and you obviously didn’t get to see how tricky the surface was at the weekend (v Zebre in Parma) on TV but it was quicksand we were playing on so.

“It was nice to get through 30 minutes and look at what’s coming next.

“I put a lot of work through it over the last six months and Ray McGinley is our rehab specialist here. He’s unbelievable what he does and prepared really well over the last eight months and took a bit of extra time just to make sure I was a 100%. It (the knee) feels really strong and I have got a lot of confidence in it.

“Since the injury, I tried to stay involved as much as I could and I tried to help out with defensive previews and have a look at the teams we were facing. Not only that, but I went back to finishing my degree and what not.