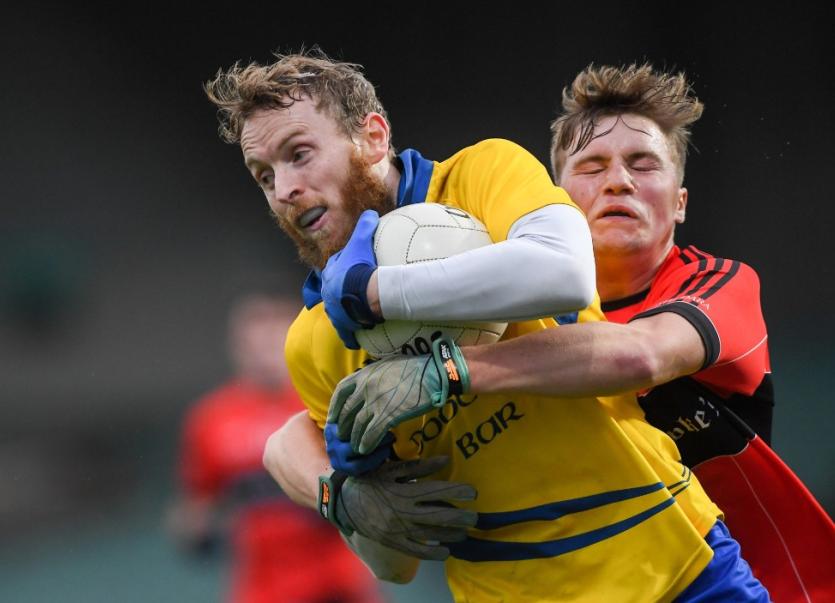 Action from today's meeting at the Gaelic Grounds

THERE was disappointment for Adare in the Munster club SFC as what was a successful season ended in a heavy 1-18 to 0-12 defeat to The Nire of Waterford.

After back to back county titles, the Limerick champions were well off the pace as they never got going in this one-sided contest.

Adare started slowly as the Waterford champions, who defeated Ballylanders in 2014, scored the first three points of the game.

Stephen Keeley got the back to back Limerick champions on the board in the eighth minute after a piercing run was finished by the big midfielder.

Apart from that score the west Limerick side were dependent on frees from Hugh and Robbie Bourke for scores as Keeley’s effort was the only score from play in the first half for Harry Gleeson’s men.

On the other hand, The Nire were able to score from play with Conor Gleeson, Shane Ryan and Craig Guiry among the scorers as was the impressive Jamie Barron.

Well in control approaching the interval, The Nire put themselves firmly on the front foot when Tom Barron scored a goal with the last kick of the first half to give the Deise kingpins a 1-10 to 0-4 lead at the change of ends.

Harry Gleeson sprung the changes at the break introducing team captain Shane Doherty and Shane O’Connor and the Limerick champions started the half well with Robbie Bourke pointing after just 51 seconds.

However, they couldn’t build on this as The Nire were comfortable in possession.

Defending in big numbers, when Adare did get a hold of possession, they were often unable to work the ball up the field.

Adare had a great chance for a goal in the 40th minute when after a good team move, Davy Lyons played in David Connolly whose close-range shot was well saved by Diarmuid Murphy. To add salt to the wounds, The Nire went up the field and scored through Conor Gleeson to go 1-13 to 0-5 ahead.

Connolly made amends somewhat with a fine point a minute later but this was a game where Adare were playing second fiddle from the outset and throughout the hour.