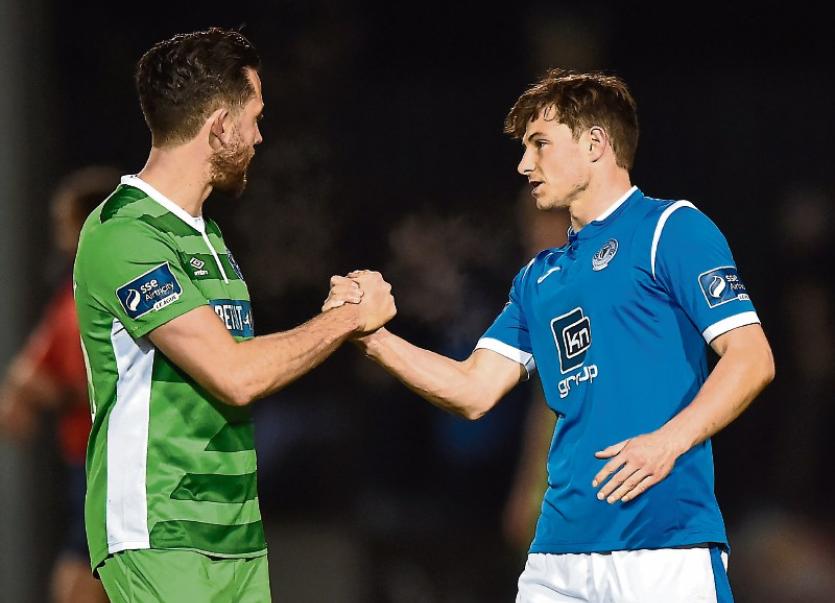 Luckless Limerick trail the First Division side 1-0 ahead of Friday’s season defining second leg at the Markets Field, 7.45pm.

Limerick created several excellent chances to take at least a share of the spoils from the game, but were unable to convert any of them.

The ‘Blues’ who suffered relegation from the Premier Division at the hands of Finn Harps after a play-off in November 2015, have struggled to score goals this season, meaning just 25 in 37 league fixtures this season.

Indeed, Tommy Barrett’s side have scored just 10 goals in 18 home league fixtures in the Premier Division this season.

Limerick skipper Shane Duggan said: “We were the better side for the majority of the game (on Monday night). We gifted them a goal really and other than that they didn’t really have any more chances.

“We dominated the play. Connor Ellis had a great chance, he was just inches away when his shot came off the inside of the post and rolled across the line.

“It kinda summed it up for us on Monday.

“It is still all to play for. Our performance overall, we were quite dominant and it a tough place to come up here. We are well in this tie and I feel we are capable of turning it around on Friday night.

“We have to stay positive. It is all to play for at the Markets Field on Friday.

“It is about getting recovered now from Monday’s game, get back training on Wednesday and see if we can turn things around.”

Duggan has appealed to Limerick’s sporting public to come out in large numbers on Friday night as the Blues fight for their Premier Division survival.

“We are a Premier Division club and we should be. The facilities and everything are there. We need everyone to come behind us on Friday night and give us that extra kick.

“Even on Monday we were the better team, but the best team lost. We can’t dwell on that now. It’s up to us to turn it round and show some character.

“We have to make sure we turn it round and stay up for the supporters and the club as well. We can’t be in a position where we go back down to the First Division.

“That just can’t happen and we need to make sure it doesn’t.

“We just have to make sure that we don’t do anything sloppy on Friday and not push too hard where we might get got with a counter attack and give away a stupid goal.

“We know exactly what we are in for, so we will be organised and ready to go.”

Limerick FC manager Tommy Barrett said the team needed to work on the ‘final third stuff’ in training in the lead up to Friday night’s second leg in order to improve their chances of scoring against Finn Harps.

“We were confident on Monday night and you have to be confident going into Friday. We definitely, I feel, can win this tie.

“It will be difficult because they are hard to break down, they’re well organised, well drilled. They’re good at what they do.

“It is going to be difficult. We have to go into the return leg with confidence.

“The crowd was massive in Ballybofey. They are really good fans actually, they create a great atmosphere to be fair to them.

“Hopefully  we can do that at the Markets Field, hopefully we can get the crowd in. Harps are bringing six buses down apparently. It would be great to out-sing and out-shout them.”

Limerick have two major injury doubts for Friday as goalkeeper Tommy Holland was stretchered off with an ankle injury, while winger Billy Dennehy had suffered a hand injury during the opening period of the game at Finn Park.