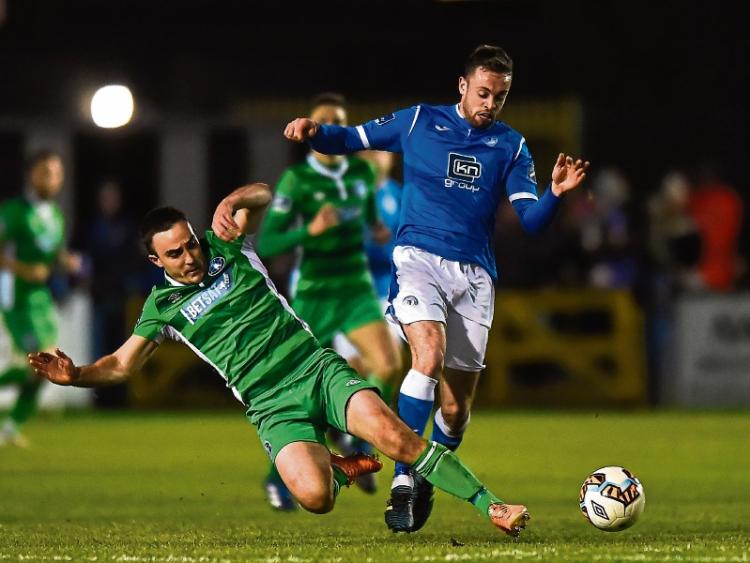 LIMERICK FC’s Premier Division status for 2019 will be decided at the Markets Field on Friday night after Blues suffered an unfortunate 1-0 defeat to Finn Harps in their relegation play-off first leg before an official attendance of  2379 at Finn Park, Ballybofey on Bank Holiday Monday night.

A first half penalty goal from former Glasgow Celtic star Paddy McCourt, playing his final home game for the First Division runners-up side before retirement, gave the home side a slender advantage going into the return leg.

It was tough luck on a tenacious, composed Limerick side which was the better side for long stages of the contest. However, the Blues’ season-longing failing in front of goal came back to haunt Tommy Barrett’s side once again.

Limerick came within a whisker of netting a precious equaliser in the 88th minute, but Barry Maguire’s superb volley was turned over the crossbar by a smashing save from Harps ‘keeper Peter Burke.

Limerick forced a series of corners through seven minutes of injury time in a desperate bid to get some reward for their plucky display. However, the Harps defence held firm just as it had done so at the Ballybofey venue when the sides met in the 2015 relegation play-off.

Limerick FC opened brightly, raiding down the right to good effect through Shaun Kelly, Billy Dennehy and Conor Ellis. The Blues created the first decent chance of the game when Harps failed to clear from a Billy Donnehy cross from the left. The ball fell to in-rushing Limerick skipper Shane Duggan, but his fiercely struck effort flashed just over the crossbar.

Two minutes later Limerick came even closer to breaking the deadlock when Connor Ellis was played in on the right. Ellis took the ball around Harps keeper Peter Burke, but from a tight angle, the former Cork City frontman’s effort to score into an empty net skimmed off an upright before being cleared to safety.

Finn Harps only decent attack of the first half an hour arrived after 25 minutes, but Blues ‘keeper Tommy Holland was more than equal to Jesse Devers well struck effort from the edge of the penalty area.

Against the run oif play, Finn Harps took the lead on 35 minutes when Killian Brouder fouled Devers inside the penalty area and the referee had no hesitation in pointing to the spot. Up stepped McCourt, on his second last appearance for Harps, to slip the ball past Tommy Holland for an unlikely lead for the home side.

Limerick responded well and Ellis had his close range effort smothered by Burke as the game opened up.

Harps retained their 1-0 lead until half-time. Limerick, who were decidedly unfortunate to be trailing at the break, had the first chance of the second half when full-back Shane Tracy was fouled just outside the penalty area.

Limerick were dealt a blow in the 70th minute when goalkeeper Tommy Holland was carried off with a leg injury and replaced by Jack Brady.

Limerick continued to press for an equaliser with Will Fitzgerald’s long throw causing panic in the Harps penalty area, but Barry Maguire’s effort on goal was smothered by midfielder Gareth Harkin.

However, when Maguire’s last effort was saved, the Blues hopes of equalising was gone.

The return leg takes place at the Markets Field this Friday, 7.45pm.