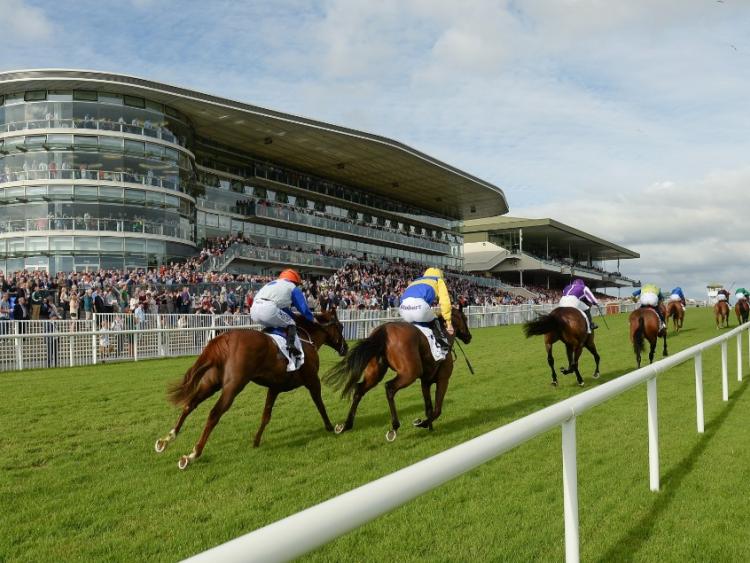 Not seen since proving himself a very progressive handicapper at Leopardstown in February when winning the Coral.ie Hurdle, Off You Go made a triumphant return to action by landing the feature Faber Audiovisuals Handicap Hurdle at Galway on Saturday for Ballingarry-based trainer Charles Byrnes. Ridden by Mark Enright, the 10-1 shot travelled well through the race and got there after the final flight to readily account for the same owner JP McManus' short-priced favourite Hearts Are Trumps by a length-and-a-quarter. Off You Go looks sure to have a bright future ahead.

In other Racing News, Magna Grecia showed plenty of guts to hand trainer Aidan O'Brien a thrilling ninth win in the Group 1  Vertem Futurity Trophy at Doncaster on Saturday.  Twelve months on from Saxon Warrior's narrow triumph over Roaring Lion, Magna Grecia responded gamely to Donnacha O'Brien's urgings to repel Phoenix Of Spain. The winner’s stablemate Western Australia ensured it was a strongly run affair and the complexion of the mile Group 1 changed dramatically in the final furlong as a line of four closed in. Magna Grecia, a neck second in the Autumn Stakes at Newmarket a fortnight ago, and the Charlie Hills-trained Phoenix Of Spain came to the fore and it was O'Brien's juvenile who got the verdict after surviving a stewards' inquiry. Several of O'Brien's previous winners of this race – formerly known as the Racing Post Trophy – have gone on to Classic glory and Magna Grecia was cut to 16-1 (from 33-1) for the Derby by Paddy Power.

Superstar Samcro will stay over hurdles this season with a tilt at the Champion Hurdle the main aim, trainer Gordon Elliott revealed on Monday morning. The six-year-old, who won four of his five starts over hurdles including the Ballymore Novices' Hurdle at the Cheltenham Festival, is set to begin his campaign in the Grade 2 WKD Hurdle at Down Royal on Friday and has the Champion Hurdle at Cheltenham in March as his ultimate aim. “I’ve spoken to Michael and Eddie O’Leary and we’ve decided to keep him over hurdles this season in the hope that he can develop into a Champion Hurdle contender," Elliott said in his Betfair blog. "I’ve never had a Champion Hurdle horse before and Gigginstown have yet to win it and we thought that it was worth giving Samcro a shot at that race.” Dual Champion Hurdle winner Buveur D'Air heads the betting at 3-1 for next year's race with Paddy Power, while Samcro is second favourite at 100-30.

Ballydoyle brigade out of luck in Oz

Aidan O’Brien’s Spirit Of Valor failed narrowly to land the Group 1 Ladbrokes Manikato Stakes in Moonee Valley on Friday, going down by a head behind the Darren Weir-trained Brave Smash. The gallant runner-up, a son of War Front, was partnered by another in-form Irishman Oisin Murphy. The Ballydoyle trainer also ran three others in the six-furlong race with 40-1 chance Free To Review under Kerrin McEvoy back in ninth place, 200-1 shot Intelligence Cross and Emmet McNamara 13th, and the more fancied runner of the quartet  US Navy Flag, who was sent off at 5-1, trailing home last of the 14 starters under Ryan more after a sluggish start. The following day at Moonee Valley, Australian wondermare Winx made it 29 wins in a row and now stands alone as the only horse to win four Cox Plates after she routed the field, including Aidan O’Brien’s challenger Rostropovich who finished back in fifth place. Rostropovich raced close to the pace before taking up the running after halfway but once headed in the closing stages had no more to give under Ryan Moore and eventually finished almost nine lengths adrift of the world equine star.

Last year's Melbourne Cup-winning trainer Joseph O'Brien will not defend the trophy after owner Lloyd Williams announced his Irish Derby winner Latrobe will be redirected to the Seppelt Mackinnon Stakes on the final Saturday of the Spring Carnival on November 10. Despite possessing a remarkably similar profile to last year's winner Rekindling, having prepped for his Melbourne sojourn with a second in the Irish St Leger (Rekindling also took in a St Leger, finishing fourth at Doncaster), Latrobe looked the ideal type for a Cup bid, but Williams announced on Thursday "the Cup this year at 3,200m is too soon for him". Williams, the record-holding six-time Melbourne Cup-winning owner, prizes the Cup above all others and usually is mob-handed, so the announcement came as something of a shock – but he still has the favourite for the race, runaway Herbert Power winner Yucatan Ire.