Munster’s Johann van Graan: ‘Glasgow gave us bloody nose few weeks ago – we had to fight back’ 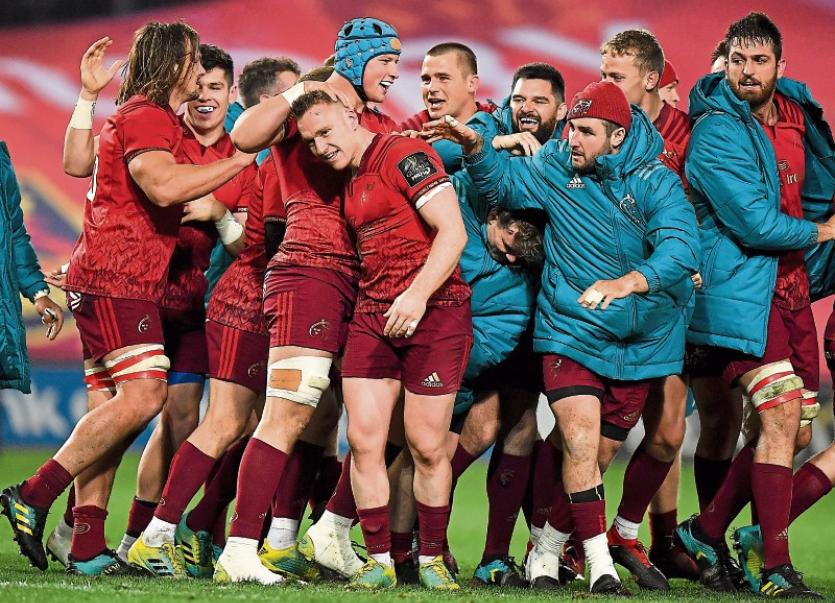 Rory Scannell, centre, is congratulated by his Munster team mates after landing the match-winning penalty with the last kick of the game against Glasgow at Thomond Park on Saturday night

MUNSTER head coach Johann van Graan said it was crucial they fought back from the brink in Saturday night’s dramatic Guinness PRO14 win after the Scots left the province nursing ‘a bloody nose’ in Scotstoun at the start of the season.

Rory Scannell’s last gasp penalty from just inside the Glasgow half helped Munster claim a sensational come-from-behind win at Thomond Park before an official attendance of 13,356.

Johann van Graan said: “We actually had a chat with all the kickers during the week about the distance and having a match-winning moment.

“I had a bit of a joke with Rory (Scannell) a few days ago, he put a few long ones in, so I said ‘listen, the time is going to come for one’ and it came sooner than we thought.

“I’ve never been a kicker, but I think as a kicker you want those type of kicks. He wanted to kick. They made the call on the field and what a brilliant kick to win the game.”

Scannell’s match winning kick sparked scenes of jubilation among the Munster replacements who flooded onto the field to celebrate with their team mates.

“It’s a great moment for him, but more for the team.

“I don’t know if you guys saw the reaction of the rest of the squad. We’ve worked so hard over the last few weeks to get positive results and we knew we came up against a championship side tonight, and it literally took 80 minutes to beat them by that kick. It was a great effort by the lads.

“We had a bit of a discussion in the coaching box (about whether we should go for a kick at the posts or opt for touch) but Pete (O’Mahony) and I are very aligned to what we need to do and in those moments in battle, you trust your leadership group and captain. I knew if one of the kickers wanted it they’ll take it. Obviously Rory wanted to kick and knew he’d have the distance and then you back the call on the field and for us luckily he hit it.

“This was not a regular game. You saw in the first minute what it meant to both sides, not one of these sides were going to blink. All 30 guys were in there, and that’s the rivalry between Munster and Glasgow.

“They gave us a bloody nose a few weeks ago, and we knew we had to fight back and we were definitely not going to blink in this game. It was a massive game in our calendar and we knew it was coming up after Europe.

“It’s so difficult to get the guys up again after two European games and after the Leinster game and after the Ulster game. This five-week block has been massive for us as a group and a lot of guys are leaving tomorrow for Ireland and we’re only seeing them in December again before the next European game.

“It was very important for us as a team to get through this one and thankfully we did.”