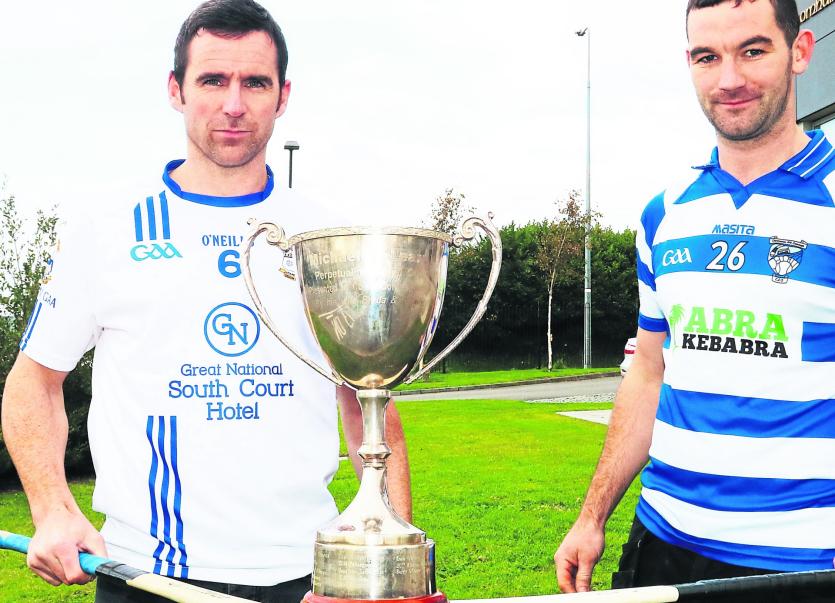 Captains Mark O'Riordan and Peter Ryan pictured ahead of the final

DROMIN-ATHLACCA are Limerick IHC winners after a 2-15 to 0-14 final win over Croom.

David Breen and Adam Costello scored a goal in either half to seal the title against a Croom side that had two men sent-off in the final 10-minutes.

Dromin-Athlacca were 1-8 to 0-7 up at half time with inter-county man David Reidy accounting for 0-7 (4frees).

The sides were level on three occasions up to the 12th minute with James Malone and Reidy exchanging frees.

Four successive scores then moved Dromin-Athlacca clear - a 21st minute David Breen goal leaving it 1-6 to 0-3 ahead. It was a fine finish from Breen, complete with dummy after a pass from Reidy.

Although backed by a tricky breeze it was the 25th minute when Croom finally scored from play but they were no briefly on top and hit three on the trot.

It fell to Reidy to finish out the scoring and give his side a four point interval lead.

Points from Gerry Quaid and Breen extended the advantage within six minutes of the restart but frees from Malone ensured Croom kept in touch and it was 1-11 to 0-11 entering the final quarter.

Croom weren't helped when Mark O'Riordan was sent off in the 49th minute and then sub Stephen Moore was also shown a red card in the 54th minute.

Undeterred frees from Malone maintained their interest until a 56th minute Adam Costello goal for Dromin-Athlacca.

Points followed from Breen and Jason Lenihan in the six minutes of injury time.

The first score from play in the half for Croom also came in injury time but there was no denying Dromin-Athlacca the title and promotion to the Premier IHC.