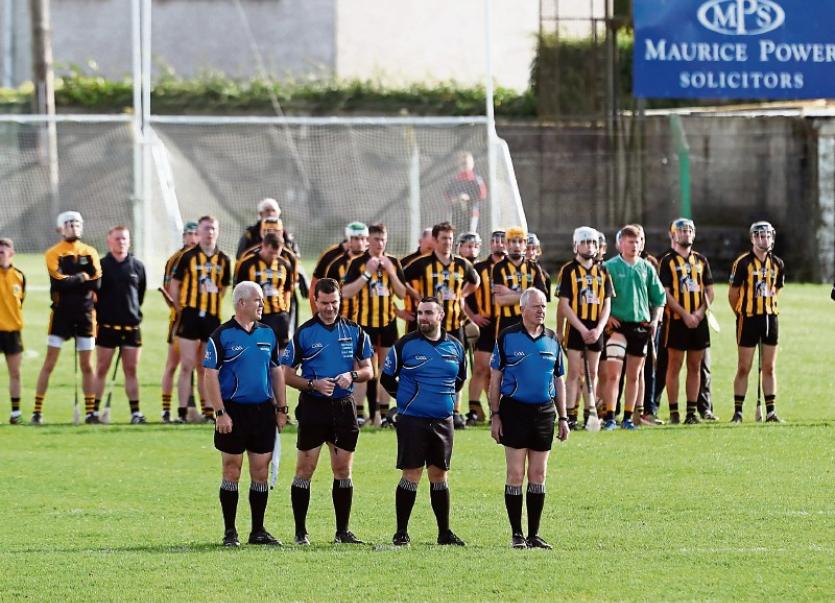 Autumn was visible on the trees as supporters travelled to Kilmallock last Saturday for the Premier Intermediate hurling final between Garryspillane and Bruff.

This day was borrowed from summer. We had glorious conditions for hurling but sadly this game never came close to matching what most people expected.

A large crowd gathered in the hope of seeing a good game but it was Garryspillane that led the way from start to finish.

Quite simply Bruff failed to turn up. They left it too late to start hurling but when they did we saw enough to suggest that had they been in the game earlier the outcome might have been different.

Garryspillane are old hands and they came expecting to win. They had the mental strength that is vital to win finals and at no stage did they really allow Bruff into the game.

Bruff were sluggish, they were caught early with a cracking goal by Man of the Match Callum Sheehan, he showed a great turn of foot and for such a young player he caused the Bruff full backline lots of trouble.

County finals are about winning and regardless of the quality it brings great joy for players, club and community.

Garryspillane have tasted success many times but this latest win comes at a time where they have young players developing well at minor level.

If this game was a yardstick for the Premier championship then it was a poor reflection. The gap between this level and senior is fairly substantial but like they have done many times before, Garryspillane know how to survive and will not in the least be one bit intimidated by returning to senior level.

They are still relying on players that are in the autumn of their careers but their experience had a telling impact on this game.

Players like Davy Ryan, James Ryan, Donie Ryan and Michael O’Donnell have contributed a huge amount to Garryspillane and their craft, desire and passion has always made them a very difficult team to beat.

Bruff were in trouble in a number of areas and their inability to score from play made their task all the greater.

Shane Bulfin had four of their halftime total of five. That goal by young Callum Sheehan was a turning point, it came before the tenth minute and from here they took control. Bruff had the wind in the second half but they made little use of it. They need to be more direct and go at the Garryspillane backs but they realised that too late in the game.

While Bruff were finding it hard to win possession they also lacked the work rate necessary at this level. Sean Finn kept it together from a defensive point of view but I think he would have offered the team more from centre back. He did move to attack late in the game and that helped matters. The introduction of Ryan Glynn also helped. He unsettled the Garryspillane defence and in general broke up play.

Trailing by five points at the break Bruff knew what they had to do but they never got to grips. Their last score before halftime was on twenty one minutes and it took them until the nineteenth minute of the second half to find their next score.

That gap without a score tells its own story whereas Garryspillane had added 1- 4 in their first quarter of the second half. At that stage the game looked well and truly over. Leading 2 – 11 to 0- 5 Garryspillane were cruising. We didn’t know it then but Garryspillane would only score one point in the last thirteen minutes of the game. Bruff landed 0-7 without reply and they were also unlucky not to score at least one goal.

It showed they had more to offer but unfortunately for them it took them too long to show up. Sean Finn, Chris Brown and Ryan Glynn had good scores but they ran out of time.

Garryspillane were up for the game, they wanted it more and wanting comes before winning. At the final whistle it was clear that this win meant a lot to all involved in the Garryspillane club.

Supporters came from all sides onto the pitch. They stayed on it for a long time after the game and they all savoured returning to senior level.

The real strength of Garryspillane over the past few years has been the work they have done at underage level. Garryspillane have always produced hurlers in good times and bad.

They have a very big area to pick from now but tradition runs deep in this parish. Many of the same families are still providing players and it looks like they are in a good position going forward.

Garryspillane won premier minor title last year and they are back in the final this year.

That is real progress. John O’Halloran refereed this game and he did a fine job. I think he has the capacity to climb the ladder and it wont be too long before he is seen at inter county level.

Tournafulla won the all ‘West’ County Junior final last weekend after they had the better of near neighbours Kileedy.

Hurling has always been the lifeblood of Tournafulla and on hearing of this great win for them I remembered the late Timmy Horgan. Oh, how he would have loved to have been in Dromcollogher last Saturday.

It has taken a great effort by many for Tournafulla to achieve this win. This club has produced some greats over the years.

Since its foundation in 1899 Tournafulla have given outstanding service to Limerick GAA. They lost many players when the down turn came and were it not for the great efforts of some great people they might well have not survived.

The junior championship is possibly one of the hardest championships to win and Tournafulla will certainly enjoy this win.

Small clubs in rural areas are finding it very difficult but the part they play in community life can never be underestimated.

Adare won back to back titles after they defeated Ballylanders in the County Final last Sunday.

This is a fair achievement for a club that here to fore was very much focused on hurling. They have slipped badly in hurling but football has developed well over the past few years.

They were the favourites going into the game but Ballylanders made them fight for the title. Kildimo Pallaskenry had a great win in the junior title.

This is a young team with the majority of them very focused on hurling. It was a great end to the year for a club that is progressing really well.

On Saturday evening the Limerick senior hurling final will take place at the Gaelic Grounds.

The senior final is a very special occasion and it’s a great pity that this game will be played under lights.

I don’t think such an important game should be played under lights and I hope it’s the last time it happens.

Na Piarsaigh will go in as hot favourites having dominated over the past few years. They will face a Doon team that are back in the senior final for the first time in eighteen years and they will want to take full advantage of it. They certainly have players good enough to cause Na Piarsaigh lots of trouble but if they are to win they will need to press the levers very early in this game.

They must set the tone because if they allow Na Piarsaigh express themselves they might find it very difficult.

Doon will need players like Pat Ryan, Darragh O’Donovan, Richie English and Barry Murphy to lead. They have a lot of good players well capable of going toe to toe with Na Piarsaigh.

On Paper Na Piarsaigh have a super team, a forward line where all six forwards are currently or have played senior with Limerick.

It has the makings of a good game and if Doon are there with ten minutes to go they have a really strong chance.