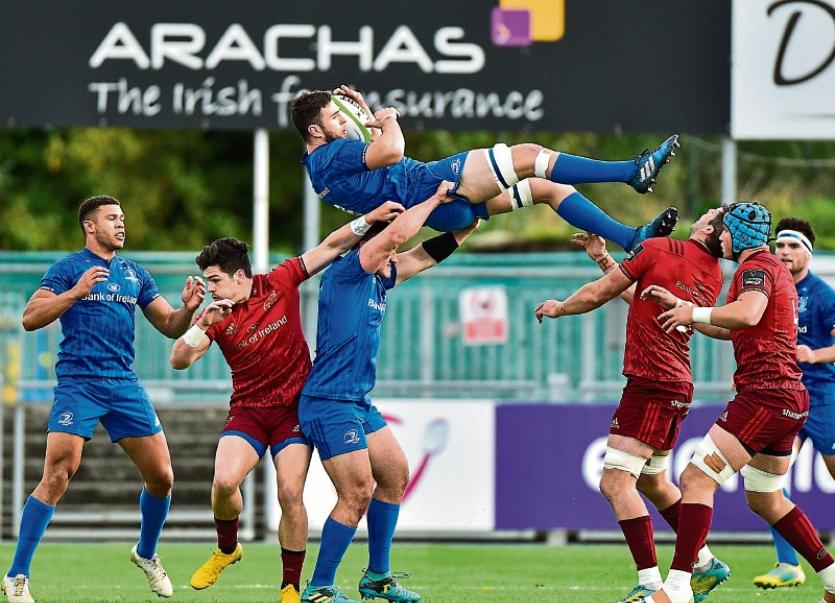 Josh Murphy, of Leinster A, wins possession against Munster A from a line-out in their Celtic Cup clash at Energia Park, Dublin on Friday evening

MUNSTER A’s hopes of reaching the inaugural Celtic Cup final were dashed by arch rivals Leinster A who ran out impressive 46-25 winners in their crucial fixture at Energia Park, Dublin, on Friday night.

The one bright note for Munster A in the interprovincial clash was the return to action of their New Zealand out-half Tyler Bleyendaal.

The talented playmaker was sprung from the replacements bench in the 55th minute to make his first appearance for Munster since suffering a neck injury last February.

Munster A remained well in the contest when trailing 11-15, despite a girtty first half showing. However, five second half tries for Leinster A  ensured they will represent Ireland in the upcoming Celtic Cup final at Munster’s expense.

Munster A were forced to rejig their side before kick-off with, Liam Coombes coming in for Stephen Fitzgerald at full-back, while Sean French was added to the starting line-up on the in the right wing. Jack Stafford started at scrum-half in place of Charlie O’Doherty, who dropped to the bench.

Leinster A led the game 15-11 at half-time, thanks to tries from Dave Kearney, inside the opening minute, and Scott Penny just before the break.

Munster A replied with a try from Shannon RFC scrum-half Jack Stafford and two penalty goals from the boot of out-half Bill Johnston.

The sides swapped tries in the third quarter with back-row Penny grabbing his second of the game, while Sean French dotted down for Munster A with Johnston’s conversion reducing Leinster A’s lead to just two points, 20-18, after 47 minutes.

Leinster A took a grip on the game soon after, however, with two tries in four minutes from Bryan Byrne and Hugh O’Sullivan helping the home side into a significant 34-18 lead after 56 minutes.

To their credit, Munster hit back and skipper Johnston converted his own try on the hour mark to reduce the home side’s lead to nine points, 34-25.

However, any hopes Munster had of pulling off a comeback were ended in the 62nd minute when Adam Byrne dotted down, while Jimmy O’Brien added another try for the home side in the 75th minute for a commanding 21-point win.