Donn O'Sullivan at the Aviva Stadium 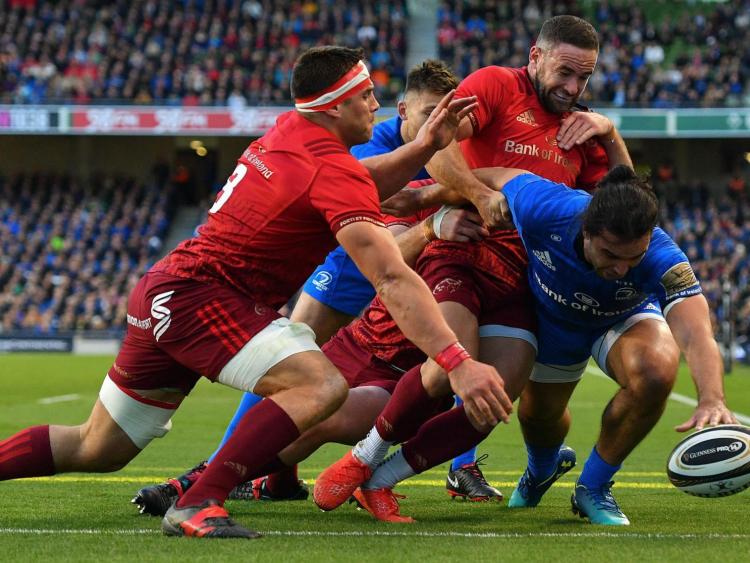 Munster lost out 30-22 to Leinster at the Aviva Stadium this evening. Tries from James Lowe (2) a penalty try and 15 points from the boot of Ross Byrne were too much for Munster whose five pointers came from Tadhg Beirne, CJ Stander and Alby Mathewson.

Leinster began the better, opening the scoring with a penalty try following an early tackle on James Lowe by Keith Earls. The tackle, as Lowe was about to collect the ball, saw Earls sin binned for 10 minutes by referee Ben Whitehouse, who did not have one of his more consistent evenings with the whistle.

Yellow card for Munster and Penalty TRY to Leinster

With Munster down a man, Leinster turned up the pressure and they went further ahead when Lowe was on hand to finish from 2 metres out despite the best efforts of Goggin, Stander and Mathewson.

With Munster now down 14-0 and also short a player, the omens were not good. However they responded well and Tadhg Beirne was on hand at the back of a maul to put some hard earned points on the board. When CJ Stander crossed eight minutes later, again from a maul, Munster were back in the tie at 14-12.

The double champions from last season kicked back into gear once more however and two Ross Byrne penalties made the half time score 20-12 to the hosts. More worrying for the visitors was their penalty count of 8-2 against from the first half.

On the restart, Leinster were once more dominant and made it tell as Lowe was on hand once more to cross the white wash for his second try. It was a flying finish from the New Zealander, another example of his ability to work in tight spaces. (27-12)

Munster needed to react now and they did. Carbery added a penalty and following four scrum penalties against Leinster, Alby Mathewson crossed for a try following a break off the back of his dominant scrum. (27-22)

With the game now really in the mix and with 12 minutes on the clock, Leinster looked every inch the champions they are as they closed out the game with some consistent carries and eventually wound down the clock, adding one final nail in the Munster coffin with a Ross Byrne penalty leaving the final score 30-22.

Next up for Munster is an away trip to Exeter in the Champions Cup on Saturday October 13. Munster have not won on the road this season and with Exeter six from six in the Aviva Premiership, another hard day at the office is in store for Johann van Graan's men.