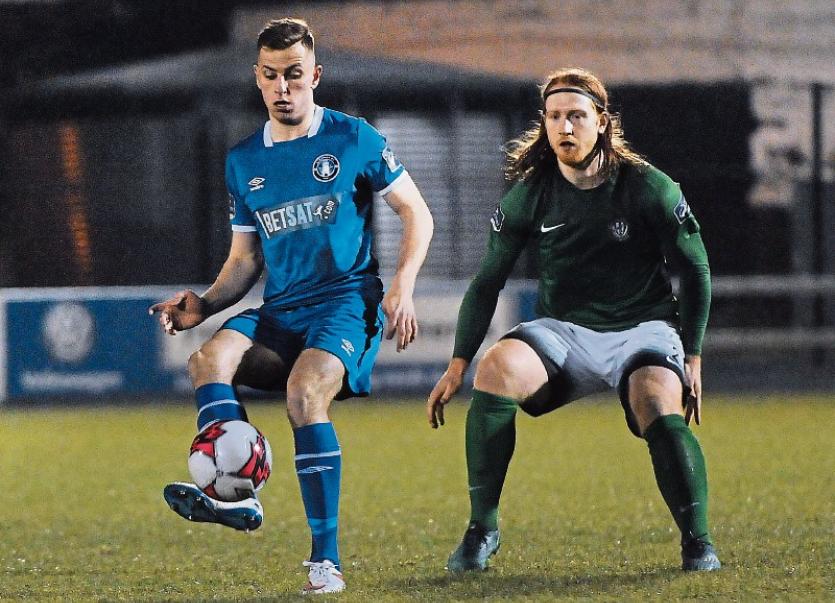 Connor Ellis, Limerick FC, in action against Hugh Douglas of Bray Wanderers, when the sides met earlier this season at the Markets Field Picture: Gareth Williams

LIMERICK FC can all but secure the relegation play-off position in the SSE Airtricity League Premier Division by beating basement side Bray Wanderers at the Carlisle Grounds this Friday, 7.45pm.

Victory over Bray on Friday would see Limerick move 12 points clear of the bottom-placed side in the Premier Division with just four games to go.

Limerick’s goal difference is 21 better than Bray’s at present.

The Blues sit 11 points behind eighth-placed Sligo Rovers so hopes of securing automatic survival in the Premier Division appear all but over.

Limerick FC have won each of their three previous SSE Airtricity League Premier Division fixtures this season, a 2-1 success at the Markets Field in March, followed by a 1-0 win at the Carlisle Grounds at the end of April and most recently a 2-1 success back at Garryowen in late June.

Those three wins over Bray account for exactly half of Limerick’s successes in the Premier Division this season.

Bray have recorded just four victories in their 31 league games this term.

Unsurprisingly for two teams battling for survival, Limerick and Bray have the lowest totals for goals scored and the highest for goals conceded in the top flight this season.

The Blues have managed to score just 22 goals in 31 Premier Division outings, while Bray have found the net 19 times over the same number of fixtures.

Limerick have conceded 63 goals or an average of two goals per game, while Bray have shipped 81 goals in 31 outings to date.

Struggling Limerick will need to bounce back from last Friday night’s 5-0 thumping at the hands of Shamrock Rovers in Tallaght when they travel to the Carlisle Grounds on Friday.

Ronan Finn, Greg Bolger, Dylan Watts and Roberto Lopes helped themselves to first half strikes as Rovers stormed into a 4-0 lead against the Blues.

Limerick have now lost their last four Premier Division fixtures on the bounce, conceding 14 goals in those games while managing to score just one goal in reply.

Whitehead will join Limerick man Garbhan Coughlan at the club, following confirmation that the Raheen striker has re-signed for the Dunedin-based club.

Twenty two-year-old Tony Whitehead played 125 League of Ireland games for Limerick FC since making his debut as a 16-year-old in a friendly against Manchester City.

Whitehead confirmed his departure from Limerick FC in July where he spent .a total of six-and-a-half seasons with the Blues and has been an integral part of the club’s senior squad.

During that time he played under five different first team managers.

Tony Whitehead said: “I’m excited to make the move.  Paul (head coach Paul O’Reilly) and the club have a really good structure in place and there’s a really nice family feel to the club, everybody in Dunedin I’ve met has been very welcoming.

“I’ve been really impressed by the intensity at training, looking at the squad Paul and Terry have put together there’s really stiff competition for places and straight from the off the sessions have been really quick and intense, there’s been no bedding in period there’s been tackles flying in from the get go!”