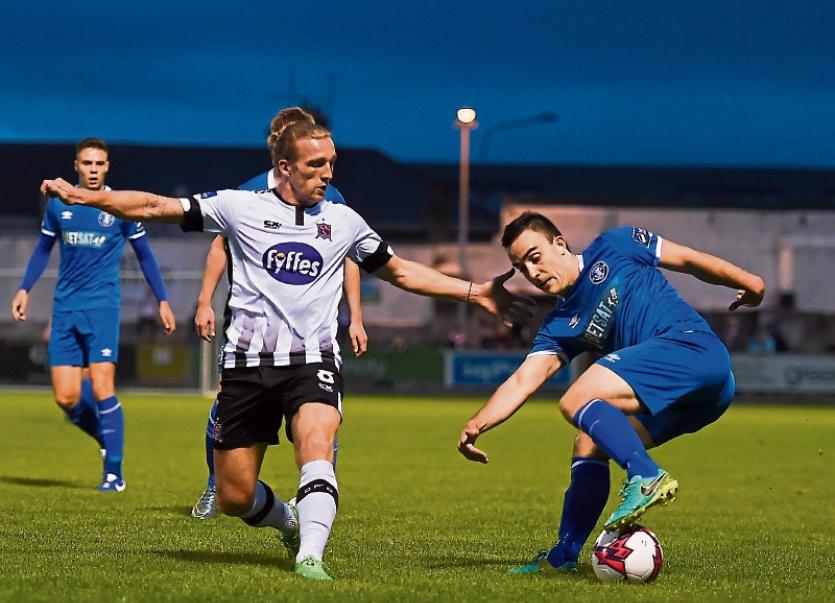 LIMERICK FC’S hopes of securing a first FAI Cup win over Dundalk in 38 years were crushed when the Premier Division leaders recorded an emphatic 4-0 win in their quarter-final clash at the Markets Field on Friday night.

Limerick had provided a stern test for Dundalk just seven days earlier in their Premier Division clash at the Garryowen venue. However, Tommy Barrett’s charges, rank outsiders at 9/1 with the bookies before kick-off for the Cup clash, were a well beaten side on this occasion.

Since winning at Oriel Park under Stuart Taylor in September 2013, Limerick have now lost 13 and drawn one of their last 14 meetings with the Co Louth side.

Right from the kick-off, the gulf in class between the sides was obvious. Limerick had fought bravely a week previously when succumbing by a single goal to the Premier Division leaders.

However, this never looked being a night when a spirited Limerick would end their five-year search for a win against the Oriel Park side, who are closing in on their fourth Premier Division league title in five years.

To put the clubs’ seasons in perspective, Dundalk sit a whopping 49 points ahead of ninth-placed Limerick FC in the Premier Division table.

From the time Patrick Hoban put Stephen Kenny’s Dundalk side in front after just five minutes, the Lillywhites took control of the contest.

A second Hoban goal in the 20th minute and one from John Mountney eight minutes before half-time had the visitors 3-0 up at half-time and effectively through to the semi-final draw.

To be fair, Limerick’s young squad battled bravely to the end of the game against experienced opponents whose playing budget is significantly higher.

The Blues deserved to score at least one goal in the second half. However, it was yet another one of those nights this season when the home side just couldn’t convert even one of a couple of really decent chances.

Limerick will be glad to see the back of Dundalk this term, as the Blues have conceded 20 goals in five league and Cup games against Stephen Kenny’s men.

Limerick made the worst possible start when Patrick Hoban fired the visitors into a fifth minute lead after he eased up to the back post unmarked. It had taken the Lillywhites more than 80 minutes to unlock the Dundalk defence a week earlier.

Hoban added a second goal on the 20th minute heading home from Michael Duffy’s cross to leave Limerick with a mountain to climb.

Clinical Dundalk moved into a 3-0 lead on 37 minutes when John Mountney finished coolly after being set up by Duffy.

It took a terrific save from Tommy Holland in the 44rd minute to prevent Ronan Murray to notching a fourth goal from Dundalk just before the break, while the ‘keeper went full length to deny Hoban claiming his hat-trick with his well-placed header.

Dundalk comfortably maintained their three-goal advantage through the opening 20 minutes of the second half. Limerick did have ball in the Dundalk net in the 64th minute through Cian Coleman, only for the goal to be chalked off for a foul on Dundalk keeper Gary Rogers.

Substitute Gerogie Kelly added a fourth goal for Stephen Kenny’s side in the 71st minute to ease further clear.

Limerick did come close to gain a consolation goal inside the final 15 minutes. However, Dundalk keeper Rogers produced two smashing saves to maintain his cleansheet.

With Limerick’s interest in the FAI Cup now over for another season, the sole focus switches to the Blues’ Premier Division relegation battle.

Should Limerick remain second-from-bottom in the Premier Division table through the remaining six fixtures, Tommy Barrett’s charges will face a mammoth two-leg relegation play-off against a side from First Division at the end of October.

Crucial weeks and months ahead for senior soccer on Shannonside.