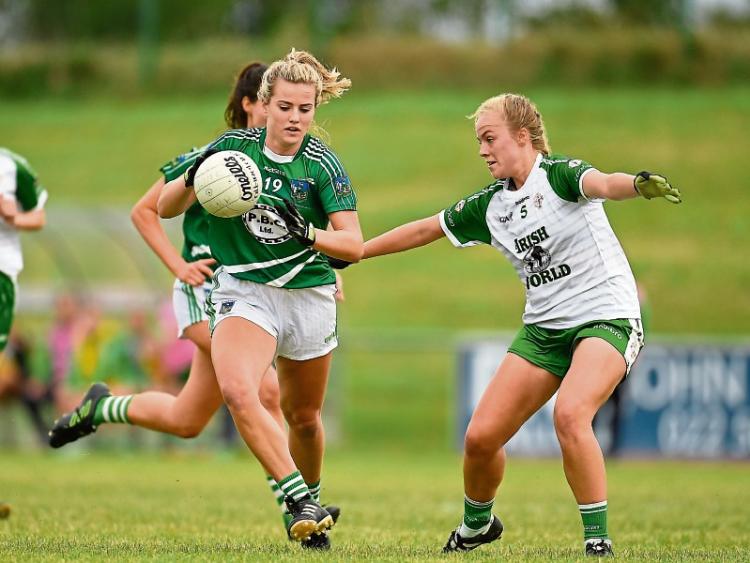 Rebecca Delee, of Limerick, in action against Noelle Cocoman, of London, in their All-Ireland ladies junior semi-final in Mallow on Sunday

LIMERICK are in the All-Ireland junior ladies football final after defeating London 3-15 to 1-14 in Mallow on Sunday.

The win puts John Ryan’s side into a Croke Park final and they are now just one win away from promotion to the intermediate grade.

Two goals from Rebecca Delee and a Dymphna O’Brien penalty sent Limerick to GAA HQ where they look to win the title they last won in 2010.

Managed by Oola native Paddy Bowles, London got the game’s first goal on the quarter hour mark through Avril Kilkelly and led 1-8 to 1-7 at half-time. The highly influential Delee netted Limerick’s first half goal.

Mariead Kavanagh and Davis got early second half points for Limerick but a pair of Cafferkey frees kept London ahead. However, Limerick drew parity 10 minutes after the restart after a good score from substitute Katie Heelan.

There was no place on the Limerick starting team for Dymphna O’Brien - one of three survivors from the 2010 All-Ireland winning team, however, she was then introduced.

O’Brien made an immediate impact, kicking Limerick in front with almost her first touch.

She then scored the crucial goal from a penalty after Kavanagh was fouled. The Gerald Griffins women gave ‘keeper Rachel Healy no chance as she rifled the ball into the roof of the net.

She added two more points in a stunning display and when Heelan scored her second point, Limerick were 2-14 to 1-12 ahead with just over five minutes to go.

Then with time almost up, Delee secured the win with her second goal to send Limerick to Croke Park and put Ryan’s side within 60 minutes of an All-Ireland title and promotion.