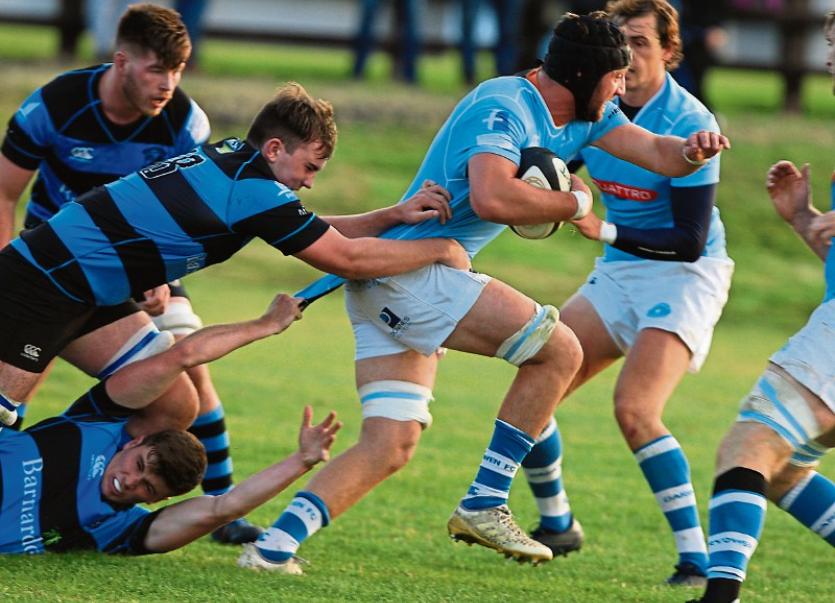 Darren Ryan, of Garryowen, on the charge in their Limerick Charity Cup quarter-final with Shannon at Coonagh

YOUNG Munster will take on holders Nenagh Ormond, while Bruff will host Garryowen in next weekend's semi-finals of the Limerick Charity Cup.

Bruff are through to the semi-finals after securing a high-scoring 28-17 come-from-behind win over Old Crescent at Kilballyowen Park on Friday night.

Bruff, who had to win a relegation play-off against Bandon at the end of last season to preserve their senior status, scored 13 unanswered points in the final eight minutes to set up their semi-final meeting with the ‘Light Blues’.

Bruff, who led 15-7 at half-time scored three tries in easing past Old Crescent in a high-scoring affair.

Old Crescent, who led 17-15 after 68 minutes, having trailed 15-0 in the opening half, managed tries through Kevin Meade and Pieter Human, while Ronan McKenna added two conversions and a penalty goal.

Meanwhile, UL-Bohemian, relegated out of Division 1B of the Ulster Bank League at the end of last season, bowed out of the Charity Cup at the last eight stage when falling to a disappointing 27-17 defeat to holders Nenagh Ormond at Annacotty on Saturday afternoon.

The Tipperary side led this quarter-final 12-7 at half-time. UL-Bohs scored tries from  Joey Conway and Hugh Bourke, while the Red, Red Roobins points tally was completed with two   conversions and pen from the boot of Mike Mullaly.

Garryowen had earned their semi-final place with an impressive 24-5 win over Shannon at Coonagh on Friday night.

Young Munster received a bye into the semi-finals after their scheduled quarter-final with Thomond did not take place. Meanwhile, the first round draw for the Bank of Ireland Munster Senior Cup takes place today Monday in the University of Limerick.