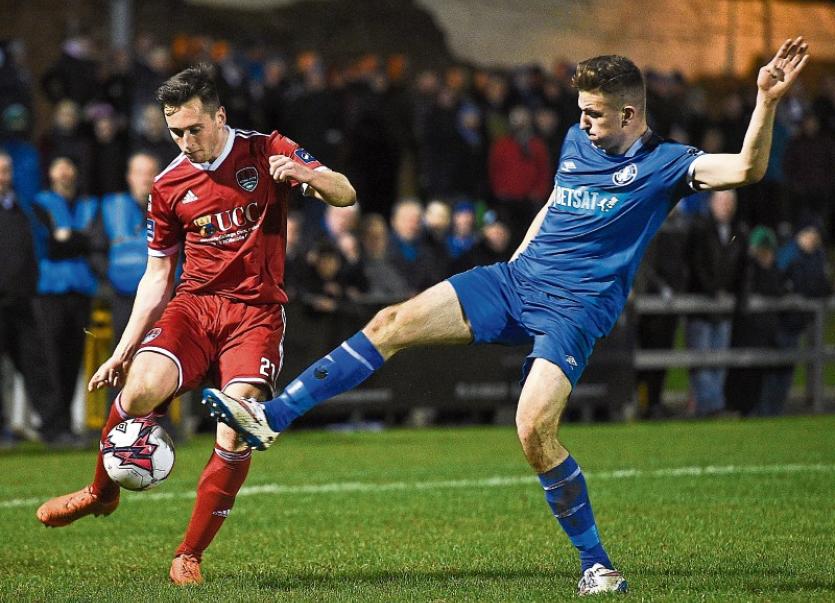 Connor Ellis, right, in action here against Cork, netted the Blues first goal in their 2-1 FAI Cup win over Cabinteely on Friday night

LIMERICK FC progressed into the last eight of the FAI Cup with a comfortable 2-1 win over Cabinteely at the Markets Field.

A strike in either half from Connor Ellis and Barry Maguire settled the tie, with the hosts never really in too much trouble from the off.

Limerick made five changes from their damaging 3-1 defeat to Sligo Rovers last week. Tommy Barrett all but admitted that the Blues were destined for the relegation playoff for the second time in three top-tier seasons after the Bit O’ Red left Limerick victorious, and his primary focus would likely be on the cup.

Captain Shane Duggan missed out after accumulating ten yellow cards, while Kilian Cantwell’s fitness wasn’t worth risking. They joined Killian Brouder, Karl O’Sullivan and Will Fitzgerald in sitting this one out. In their place came Shaun Kelly, Colman Kennedy, Shane Tracy, Danny Morrissey and Danny Murphy.

Limerick hadn’t lost a home game in the FAI Cup to a side in a lower division since falling to Dalkey in the preliminary round back in 1976, when current Cabo manager Pat Devlin struck the shock winner.

There would be no shock on this occasion, though.

Connor Ellis capitalised on a poor backpass from Karl Manahan on the half-hour mark to round Cabo stopper Stephen McGuinness and slot home.

Barry Maguire put the game to bed when he converted Ellis’ cross at the second attempt in the second half, before a late Kevin Knight goal handed Cabo a consolation.